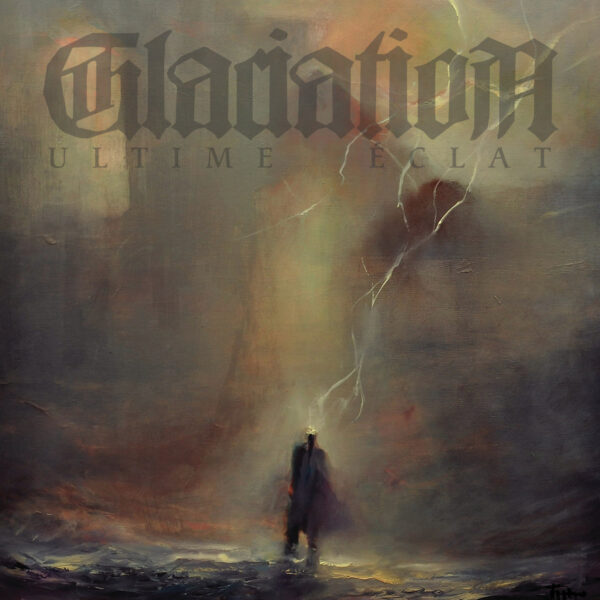 Despite forming in Paris back in 2011, this five-piece BM band doesn’t boast a large discography: it has only three albums at present to its name, there are no singles, EPs, tapes or splits with other bands. A big part of the reason would have been Glaciation’s revolving-door line-up over the ensuing years with none of the original members still with the band, and the current line-up having existed only since 2018, vocalist Hreidmarr reforming the band in that year after a year’s hiatus. This is the line-up that recorded current album “Ultime éclat” so this work could be regarded as the band’s real first recording. Even the album’s title indirectly suggests as much.

The album begins defiantly with the title track introducing a very aggressive and hard-edged style of melodic thrashy BM with some atmospheric and prog rock elements. Screaming vocals, hard-pounding blast-beat percussion, layers of guitars, bass, mellotron and a slight atmospheric background put the meat on carefully crafted songs and lyrics. Hreidmarr certainly intends this band to be in for the long haul and the rest of the band seems to agree with him, as everyone plays as part of a tight, solid unit. The drummer attacks his skins as hard as he can and the other musicians bring zest and energy, and ideas as well as subsequent songs make clear with their occasional deviations into acoustic melody and a little ambient experimentation. Hreidmarr himself goes through heck of a load of vocal contortions and just about rips his heart out on most songs, emotionally as well as physically: the odd thing is that his vocals are not more upfront in the mix.

Most songs are lengthy and have an epic quality to them thanks to the layers of instruments and atmospheric wash applied to them along with the lyrics. They can be very dense and sometimes it seems everyone is fighting for a bit of attention when perhaps in each song individual musicians could have been allowed a little solo slot that highlights their skill and talent. There is no denying though that the band is capable of writing and playing some very stirring and dramatic music in tracks like “Et Puis le Soufre” which is a virtual rollercoaster of soaring and swooping riffs, melodies and key changes. Had the band thought of it, each song could have been a mini-opera with an extra couple of minutes each but maybe that would turned the album into a test of sheer painful listening endurance so let’s not tempt Hreidmarr and Company. There are moments (like “Acta est Fabula”) where the album does get a bit precious and pretentious, and juxtapositions of sheer raw BM savagery with lonely piano and Grand Guignol spoken word recordings in parts nearly tip Glaciation into camp histrionics.

You’ve got to admire if not love a band that keeps going with its brand of epic BM operatic savagery in the second half of the album when ideas are likely to be thin and the temptation to fill in space with filler is strong. Tracks 5 and 6 are still very aggressive but I start to wonder whether Glaciation risks losing some listeners by going at each and every track like a sledgehammer whacking down every brick wall it finds. Possibly one of these tracks could have been left off the album – the remaining recording would still be a ferocious affair. Just when you think the band seems locked into a never-ending groove of constant attack, the album ends with a calm and restrained piano-only instrumental piece which for some listeners may be so much out of whack with all the Strum und Drang that came earlier that it’s bound to be awkward and a disappointment. The album probably deserves to go out on a high pyrotechnical level.

Doing things in moderation is certainly not Glaciation’s motto and having that savage and brutal edge to their music will stand the band in good stead among their fellow French BM contemporaries. The French BM scene keeps on raising the bar to the extent that bands are only as good as their next album and even current recordings quickly become past history. Glaciation just need to find the right balance between delivering epic BM operatic ferocity and falling into excessive theatrics on future recordings: if they can do that, these musicians are on their way to carving out a distinctly individual niche combining raw BM, progressive rock and elements of their nation’s past musical heritage in the French underground metal scene.