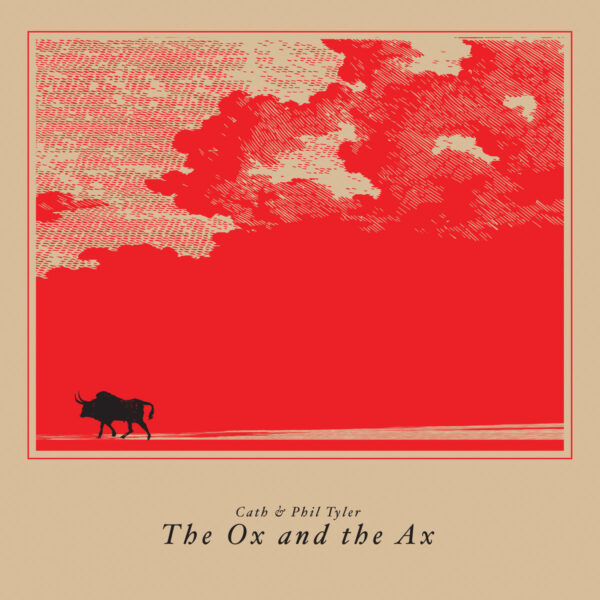 Totally excellent LP of modern folk singing from Cath & Phil Tyler on The Ox and The Ax (THREAD RECORDINGS THR003). This one’s been lost in the box since Feb 2018, much to my chagrin, but I find the CD and LP versions are still on sale at time of writing.

This is only their third-ever full-length, and I’m glad to say I have both their other releases on the No-Fi label (Dumb Supper and The Hind Wheels of Bad Luck), plus it’s been an eight-year hiatus since the last one. Happy to report this is their strongest offering yet, plenty of great songs in the spirit of old traditions, including murder ballads, songs of doomed love, historical stories, and at least one Marxist-inflected working class rouser that would have kept A.L. Lloyd happy. I’ll say the most noticeable improvement is a musical one; both Cath and Phil are singing with much more confidence, clarity, and power than on previous outings, and there’s more conviction in the tone, somehow; I think part of it comes from their deep knowledge (I assume) of the sources they work from, and understanding of the meaning. As ever, as with the best folk singing, it’s delivered in a crisp, unemotional style, reporting on the bare facts of awful events with concision and accuracy. C&P do not falter in this task and allow the truth of each song to shine clear. The result is cathartic, deep truths about human nature, faced head-on with an unblinking gaze.

So much for the singing voices; the guitar work and banjo work is also evidence of a new gold standard in their music, and once again clarity is the hallmark of their craft. Much as I love Richard Thompson, he can be prone at times to show off his proficiency on the guitar a little too much, but none of that obtains with the pared-down, rugged and honest string-picking on offer here. So far, great singing and great playing, and superb melodies too – each of the nine tunes really get under your skin, letting the slightly disturbing, uncanny, or macabre subject matter and stories resonate deeply. Which brings us to the sources for these mostly traditional folk songs, which include ‘The Two Sisters’, ‘King Henry’ and ‘Finest Flower’. As ever, C&P are thorough about disclosing their sources and cite which versions they choose to sing, and where / how they learned them. In the case of ‘The Two Sisters’, this is especially poignant given the large number of variations of this song that exist, and not just in the scholarly collections of Child and Roud; it’s a song whose story has an international spread. C&P learn from books and printed sources, but they also learn from singers, and it’s the names of the latter that turn up most often in their list, including Almeda Riddle of Arkansas, Maggie Hammons of West Virginia, and UK top revivalist Martin Carthy. There’s your oral tradition in folk, continuing away.

The other development I will note is that the duo seem less concerned with making a show of their deep knowledge of sources; on previous records, their USP was to sing a kind of “mash-up” of two or more songs. This approach was conspicuous on Dumb Supper, where they split up versions of ‘King Henry’ across two songs, with two stories and two outcomes. None of this practice in evidence on The Ox and The Ax, as far as I can tell, although it might persist on ‘The Two Sisters’ which has been spliced with ‘A Fisherman’s Song For Attracting Seals’, whose earliest printed appearance is 1784 (in The Patrick McDonald Collection of Highland Vocal Airs). Whereas some diehard traditionalists would see this as a betrayal of the “purity” of sources, on the contrary this is precisely how Cath & Phil Tyler make the music come alive. They draw no lines between English and American folk forms, and it’s fair to say this particular mixture is in their DNA (Cath is from Massachusetts, Phil was born in Newcastle). Some contemporary UK musicians in this genre might tend to over-exploit the supernatural side of old folk songs; at worst, they can happily skip down the Wicker Man path, equipped with half-understood Alan Garner references, with not much knowledge of what they’re doing. Conversely, Cath & Phil Tyler not only stay true to their sources, but remain focused on the core of humanity that makes folk music real in the first place; it’s this that they concentrate on, and hence deliver one of the most honest recorded statements to have been heard in this field. Peter Kennedy and Bill Leader would have been proud.