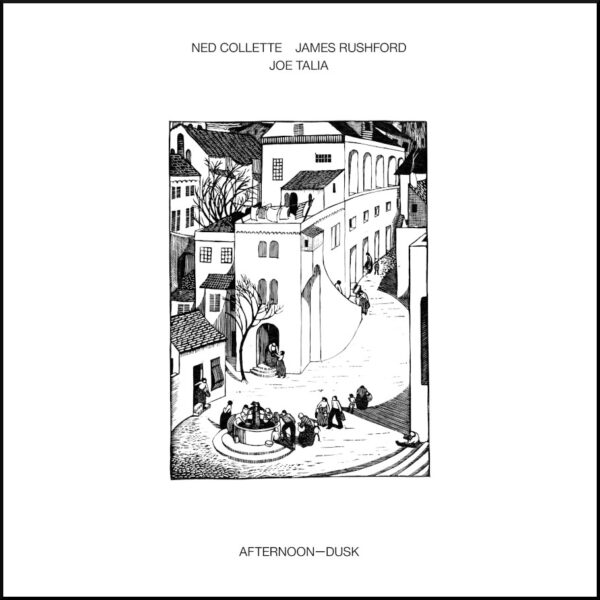 Ned Collette is an Australian musician who is now in Berlin…he is regarded by some as a player of “experimental folk music” and since 2005 released a number of items on the Australian Dot Dash label, some of them teaming up with the Wirewalker duo. Half of Wirewalker is the drummer Joe Talia, who appears alongside Collette on today’s LP Afternoon-Dusk (FEEDING TUBE RECORDS FTR468), where they are joined by a third Australian composer James Rushford who contributes the viola.

The LP is two sides of instrumental music, though that doesn’t begin to some up the subtle and beguiling processes at work here, which include a certain amount of added ambience and field recording and perhaps a certain amount of editing, to form two perfectly-realised suites of ever-flowing and changing music. Collette plays guitar, synths, bells, drum machine…Talia also adds synths along with his percussion work, and is credited with operating the Revox tape machine which may be the source of some of these curious background sounds that keep leaking in. The whole record is open-ended and porous, with little in the way of conventional musical structure, and the players simply pursue a dream-like atmosphere almost as surely as if they were trying to pin the passage of time to the sky, applying a stapling gun to passing clouds and dipping entire weather systems in epoxy resin.

The ebb and flow of these evanescent ideas is assembled with much finesse and grace, compressing many musical ideas into a fascinating stream-of-conciousness tapestry. They do this collaging – if indeed that’s how it’s done – with far more imagination and taste than the much-vaunted Pink Floyd LPs which exhibit this tendency, for instance side two of Meddle or parts of Wish You Were Here. The first side has a balmy, pastoral sun-drenched charm, while the second side introduces touches of drama and uncertainty in its mixed chords, to reflect the approaching evening. In evoking these subjective states of “afternoon” and “dusk”, I am almost reminded of surrealist paintings (especially Di Chirico or Miro) whose artists tilted their brushes at the same challenge, but this particular LP eschews the surreal and elects to use a rather prosaic illustration of a city square seen from above, in a locale that could be almost any small village in Europe at any time after the second World War. I enjoy the relaxed and free-form-ish playing of the musicians here, even if at times the tunes and melodies (sketchy though they be) do sometimes feel a tad sentimental.

Joe Talia has worked before with Jim O’Rourke, James Rushford has played with Oren Ambarchi and plays in the groups Food Court, Golden Fur, and Ora Clementi. The press notes to this one expend some time telling us what a departure this is for Mr. Collette, whose last double LP Old Chestnut was more song-based. I never heard it, but I certainly welcome this excursion into long-form and associative music. From 8th December 2019.