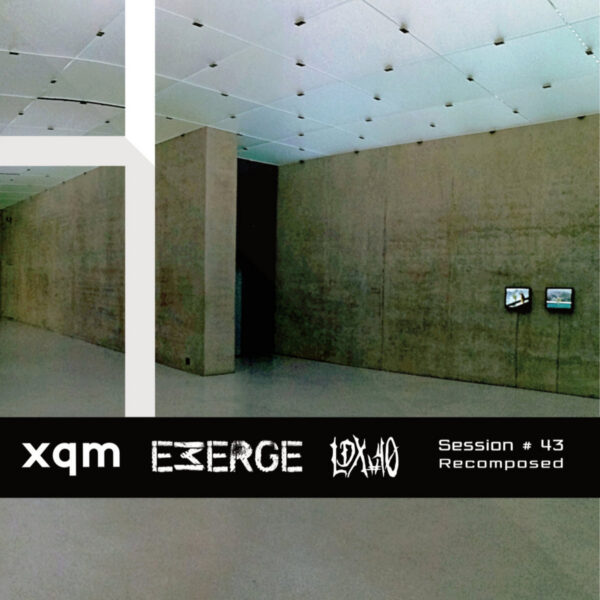 The record Session #43 Recomposed (E-KLAGETO 20 / ECOCENTRIC RECORDS ER #210) is something of a three-way split between three minimal-electronic types who I am not familiar with. The starting point here is the long track Session #43, one of an ongoing series created by the duo xqm who are Manuel Schaub and Matthias Weigand from Cologne. Evidently they are not too fond of titles, and the majority of their numbered sessions have been self-released, although they have sometimes appeared on the Noise Control Act label. Today’s work is a lengthy 20:54 of very slow and understated low drone sounds, with plenty of “room atmosphere” or other field recordings opening it up. The cover art, perhaps an underground car park or a concrete art gallery, seems the perfect grey-coloured accompaniment to this near-empty music, but I’m finding it compelling enough on its own terms, with its barely-there interventions in terms of filters and other modifications. At least the xqm duo have a nice light touch; their music floats along, rather than simply sitting there like a fat otter inviting us to admire its finely textured pelt.

The piece is then reworked or recomposed across the next two tracks, first by Emerge on ‘Trover’ and then by LDX#40 on ‘Pangea Mix’. Emerge likes to print their name with the letter M tilted to one side and have devoted themselves to “minimalist traditions of experimentalism and non-academic noise music”, speaking of sound structures and atmospheres as their main stock-in trade. Emerge is Sascha Stadlmeier, who also happens to run the fine label Attenuation Circuit. On his reworking, Emerge keeps some of the original atmospherics of the track, but he adds little dribbles of ring-modulated doodle which I find a bit obtrusive. He also succeeds in closing off much of the “openness” of the original, such that we now feel much more closed in and submerged in some underground tank. There may be more variety and incident here than on the xqm original, but I’m not feeling there’s any point to it; just one too many effects, details, and attempts to redirect the sound into an ambient instrumental.

LDX#40 might be T. Jakob, whose method depends heavily on the antiquated Commodore C64 computer to which he is quite attached, and he’s also been working up an audio-visual stage show, sometimes performing masked. Not many records to his name, but he has appeared a few times on Attenuation Circuit with file-based and CDR releases. I’m certainly digging his low-key, mysterious approach to “recomposing” on his 15:42 excursion; seems a lot more focused than the messy doodles of Emerge, and he remains fixated on repeating his few sombre lower-register notes, which creep out of the steel canister in among a gentle but menacing fog of background wisps. Nice unsettling mood music for those of a macabre turn.

Overall this split is an uneven release perhaps, but contains plenty of “virtual space” for the listener to wander around in for days. From 2nd December 2019.