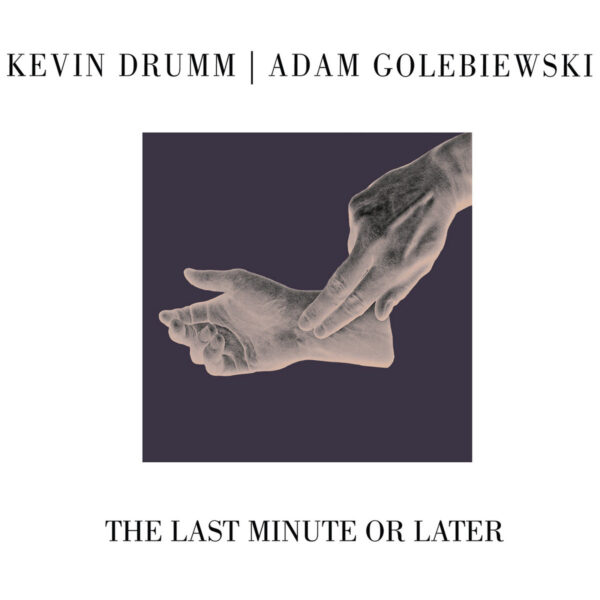 Polish drummer Adam Golebiewski continues an informal series of team-ups with other international musicians with his latest album The Last Minute Or Later (UZNAM.2), where he does it with renowned American noise-maker and all-round prolific emanator of extreme sounds, Kevin Drumm. This is also the second release on the Poznan-based UZNAM label, which might be run by Adam himself (previous outing was Meet The Dragon in 2017).

Drumm operates “electronics” on the set, which might refer to a death-dealing mixing desk setup of his, or perhaps something less lethal but hopefully still comprising black boxes with dials and knobs which he twists with his talons. He also brings his personality to the event (recorded at a club in 2016), and given his propensity for grand gestures, his larger-than-life presence, his taste for leaning towards the monumental, it means the Polish half of the act has to work overtime on this occasion. Take the opening cut ‘Lightening Up’, an ironic name if ever there was, since over the course of 11:55 mins the track escalates in volume, violence and density, until the pair are thrashing about inside a gigantic electric Drumm drone that pushes everything aside as surely as a bulldozer. Golebiewski’s response is to twitch like a trapped mosquito in a bowl. It’s a scary way to start a new friendship, but evidently these are the high stakes which Drumm demands if you want to shake his hand.

Once that Mexican stand-off has calmed down, we pass into ‘I Can’t Not Lie’, a slightly calmer escapade where at least there’s a little air and space for the drummer to flex his elbows. Much clatter results. The sweet spot of this particular cut is when Golebiewski is settling into a scrape-and-bang episode of the rough untutored sort he does so well; Drumm’s tactic is to counter each move with menacing whoop and screech effects from his boxes of yawpery, exhibiting just the right degree of sadism as he twists the diabolical dials. Chaos on the brink of more chaos. Must every encounter end in violence? The next piece, ‘Fenced Off From Larger Worries’, offers some respite from the gladiatorial-combat mode exhibited so far. The one trouble, if such it be, is that it evidently takes this duo quite a while to find the “centre” of what they’re doing, and in this instance we have to wait a good 5-7 mins before they get anywhere close to it. The gist of the argument of ‘Fenced Off’ has something to do with a subsonic tone or surly menace, against which metal percussive scrapes barely dare to make a whisper in case they wake up their abductor who has locked them in a cage. Still, if they’re building a “safe space”, this is about as compassionate as they get, tense and eerie though it be.

So far the “Last Minute” of the album title is making good on its implied promise of an all-or-nothing decision, hurriedly made in a state of desperation. Well, the album finishes with ‘Furnace’, and superficially the opening moments are indeed almost a literal sound-portrait of a blast furnace in full spate – roaring flames, clanking boilers, steam pressure, the full nine yards of industrial death by way of heating appliances. In fact it’s akin to the last hours of life on board the RMS Titanic, if you subscribe to the recent “ship was actually on fire for several days” theory. Of the four cuts, this is one of the most successful in terms of equal contributions and effective pairing of the duo’s respective soundworlds – metal, skin, iron and electric bolt pulsations blend together in a monstrous, churning mass of threatening proportions. As I near the end of the album, it occurs to me that neither player depends much on repetition or patterns to achieve their aims, and instead the general strategy is one of formless forward-movement, lurching towards an unknown goal like two blinded ogres in mud.

‘Furnace’ ends the album in a blaze of apocalyptic noise, and is doubtless the most extreme performance we’ve heard from Adam Golebiewski. His try-anything approach is certainly starting to pay dividends and each release contains unexpected developments. From 10th December 2019.