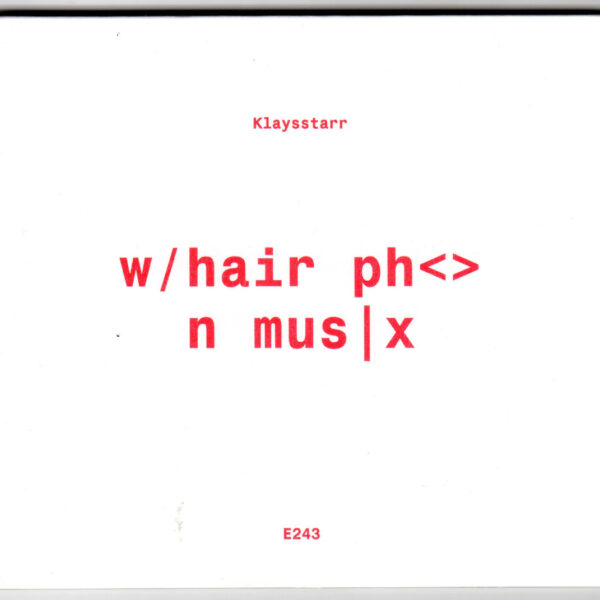 One has sometimes felt the “field recording” genre might be getting a bit stale, especially when dealing with releases from the more banal end of the spectrum, which might be why a bit of me welcomes the record w/hair ph<> n mus|x (ENTR’ACTE E243) by the Glasgow artist Klaysstarr. It’s an odd jumbly mix of sounds evidently captured from very “real world” situations, suggesting that the fellow’s entire approach is based on carrying a recorder around with him wherever he goes and capturing fragments almost at random. There’s a very rough, “urban” edge which is appealing; he seems to find interest, if not a certain species of strange beauty, in the most banal settings of our modern city-sprawls, including stations, public toilets, and shopping centres.

What he picks up, or what he chooses to show us on these choppy fragments of sound, is machinery, water, background music, echoing footsteps – which, if written down as a list already starts to resemble the kind of banality which I started out by complaining about. Dare one say Klaysstarr is bringing a certain invigoration to these emptied-out signs and meanings? Well, maybe. Most of the effectiveness in his scattershot approach is the fact that it’s just so scrambled and mangled into mincemeat – harsh edits, sudden timbral shifts, unexpected cut-outs, accidental brushing against the microphone, and like that. It’s both disruptive of any continuity and also hard for the hearing brain to follow, which might be the desired aim. Even his own press notes are somewhat disjunctive, but he’s aiming for what he calls “the split spaces of experience”, and looking for a “brain full of place fragments and music”.

As I near the end of today’s spin, it occurs to me that we’ve hardly heard a single trace of a human being – except perhaps in tiny glimpses, of furtive footsteps hastening away or a carefree soul whistling to themselves for a few seconds. Even the pop music piped into the shopping mall fails to sound remotely human, but perhaps that’s just my personal prejudice against heavy beats and autotune. One slant on the record might be to regard it as a view of the world untainted by human beings, a breed of that familiar post-apocalypse scenario where the protagonist wakes up to a deserted world. The melancholy music that drifts into the long-ish track 5 certainly fits a mood along those lines. The creator of this is Iain Findlay-Walsh and he also released this on his own ucorridor Bandcamp label, which is devoted to housing his back catalogue. Many releases here follow the pattern of perplexing, jumbled-up titles, and inscrutable cover images. If intrigued so far, by all means investigate further. From 11 December 2019.