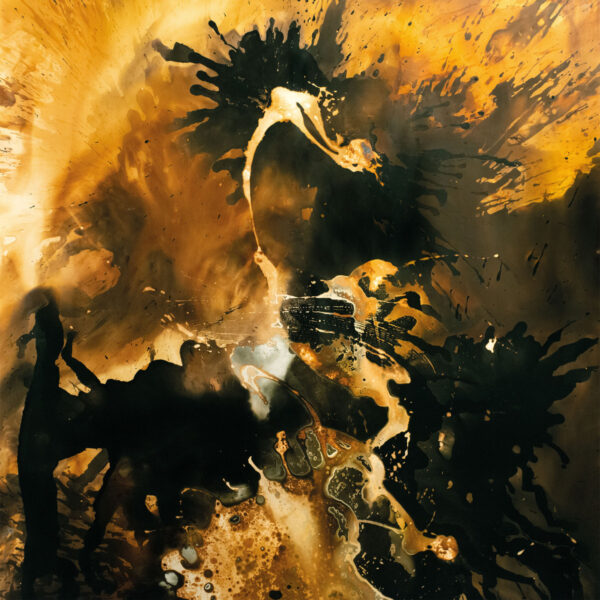 Originally composed as the soundtrack for an installation piece of the same name by French painter / photographer Fanny Béguély, one of whose works appears on the front cover of the album, this is a dark and unearthly recording done entirely with French musician Oberland’s heavily electronically processed hurdy-gurdy and Slovenian singer Tomažin’s ghostly glossolalic voice. Opener “Grotta” is an outstanding example of what this duo does with just the extreme bare minimum – one instrument, one voice – of tools. The vocals are just barely recognisable as such but still give an indication of the enormous range of sound Tomažin brings. “Grotta” sets the standard for the rest of the album to follow: it’s a darkly shimmering psychedelic soundscape of atmosphere, a range of sinister and sometimes quite malevolent moods and emotions, and a superhuman vocal performance often reminiscent in style and range of the more famous Greek-American singer Diamanda Galas.

Later tracks do a better job demonstrating Tomažin’s capabilities as a vocal performer and they are often frightening excursions into the darker, bleaker aspects of the human psyche and its often unspeakable secrets. Together Oberland and Tomažin trace a path that straddles and mediates between – and even collapses the division between – the material world we experience with our physical senses and the mystical world standing just beyond and existing in parallel with what we know. On some tracks like “Fumes”, the performance takes on a strong ritualistic and hypnotic flavour, with Tomažin acting as a medium in contact with the spirit world. The hurdy gurdy itself can be delirious and deranged, adding to the increasingly dream-like atmosphere where all boundaries and barriers are far less solid than they appear and become unstable and prone to collapse, allowing hidden forces from outside the universe to invade our senses and awareness. At times the instrument seems to mirror Tomažin’s vocals and distinguishing between the two ends up a self-defeating exercise.

It can be a deeply unsettling experience, and maybe this album is not one to play very often unless you’re absolutely sure you can sit through Tomažin’s performance which ranges from whispers to gabble to keening and shrieks, but the odd thing is that after you’ve been to hell and back with this recording, you really do feel at peace, as if you’ve faced your worst fears and nightmares and have come out stronger and more knowledgeable about yourself.