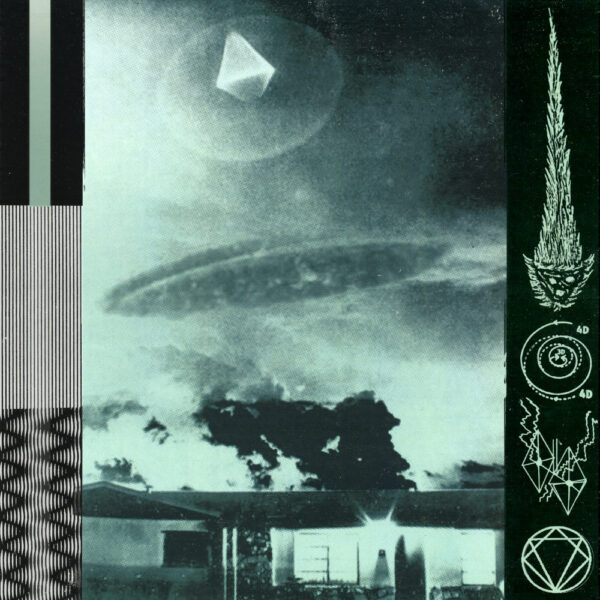 Top-grade American weird art music from Million Brazilians on their Urban Fossickated Octave (FEEDING TUBE RECORDS FTR 462LP) LP. I’m intrigued to learn these marginal genius types have been active for a number of years now and have released a number of cassettes, CDRs and albums, some of them on the Psychic Sounds label which happens to be run by band member Grant Corum. The Brazilians were formed in Oregon but have since moved to Maine, and the other main member is Suzanne Stone; on this LP, Caleb Mulkerin has joined to add his tape loops and treatments and also did the recording. You may recall Caleb from a couple of far-out records by his band Big Blood, also on this label. Plus guest musicians Tom Kovacevic on one track and Bob New with his synth on two other places…

I guess the main event here is the side-long track on Side A, ‘Release Of The Ectoplasmic Mystagogue In Three Movements’, which takes us from the Red Odik Ray to the Blue Odik Ray, ending up in Eikasia…it’s a highly enjoyable and splendid slab of plastic-melting mystery drone, wave after wave of glorpy noise and eerily soft shapes pouring from an apparently endless fountain of creativity. Or perhaps more like a benign volcanic crater that continually erupts warm strawberry jam in unfailing supplies. There is something very natural and unforced to the music that inclines me to trust it all the more; despite the slightly odd, science-fiction alien atmosphere, the mood is positive and emanates an indefinable well-being. There’s a sort of group-think among the players, allowing them to bond seamlessly into one multi-hued unit with several legs and heads, rather than a grotesque deformity pulling in multiple directions. No root chord, no structure, no real definable shape…yet here are notes, and sounds, suspended in a tasty foggy brew. I wish more players could sustain this mode of performance, which the Million-ers do without succumbing to mindless brain-numbing drone, or pointlessly strange noises for their own sake. Let’s summarise this strong opening track as an attempt by Venusians to perform a version of In C for the families back at home. And for once, here is music that lives up to the promise of its elaborate title.

The B side offers up four shorter cuts of detuned and amorphous electronic – synth – wind instrument witchery, ‘Body Training 1’ and ‘Body Training 2’ are perhaps lightweight contenders after the heavy gravity of that A side, but both come across as a less hostile version of Chrome (distortion and all) meeting up with one of the Arkestra’s reedmen. On the second one in particular, this band display their unique talent for ensuring the tune never quite stays on track or sticks around in the expected place for too long. ‘Body Training 2’ includes a glorious “solo” – if this band deal in such outmoded ideas – by saxophonist Stone, and the background vocals of monk-like proportions are suggestive of illegal Tibetan cults at work…haunting, unearthly beauty. There’s also ‘Ectoplasm Programmed Dream With Guide’, which I kinda enjoy, although its spoken-word element feels like a small gaffe; manipulated varispeeded tape loops of partly-audible mumbling mix up fragments of pseudo-religious instructions with flying saucer nonsense, and at this point Million Brazilians start to sound a bit like a bad imitation of Schloss Tegal (though less dark). Normal service soon resumed however with ‘The Hermesphere’, the closing 9:45 symphony with more beautiful voice / sung elements, excellent saxophone work and a charged magical atmosphere, set forth against the backdrop of swamp-like repeated electronic sounds that are neither droney nor formulaic. Once again the Terry Riley comparison seems apt, and perhaps a touch of the alien-bog sounds of early Pauline Oliveros when she experimented with the Buchla.

Massively impressed with this record and am now interested enough to investigate their back catalogue, of which a small sample is available on their Bandcamp page. “The Soul Mind in the House-Body World gives flight to the architecture of transformation,” indeed. Arrived here 8th December 2019, released in June 2019.