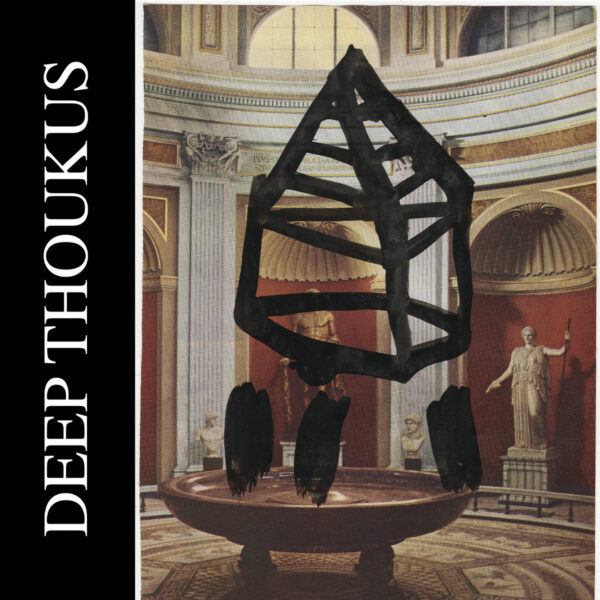 A recently formed minimalist experimental jazz duo from Norway, Deep Thoukus is Daniel Meyer Grønvold on electric guitar and Kyrre Laastad on drums. Here the band presents its self-titled debut of shimmering meditative improv jazz experimentation. Listening to the album can be a strange experience, for me anyway: sometimes it seems a little like an Indonesian gamelan orchestra with its serene air and sometimes tinkling percussion; and at other times the music has a late-1960s psychedelic blues rock vibe. That’s probably no surprise to those people who know something of the musicians’ past histories, with Grønvold at least having one foot in the world of alt rock.

While the album is divided into seven unnamed tracks of very unequal lengths, some as short as two minutes and the longest almost hitting the 10-minute mark, it can be heard as one continuous and continuously evolving organic piece. The gentle bell-like tones of the drumming, which sometimes dominates most parts of individual tracks, coupled with the guitar’s low-key presence, encourage deep immersion and meditation. The overall sound is very clear and the space within the music is often bright and very spacious.

The most distinctive tracks are those like Tracks 3 and 4 where the percussion is almost like a solo instrument and carries the entire piece, with the guitar relegated to distant second string, repeating a riff loop over and over or just creeping past Laastad’s hard-working yet imaginative drumming in the background. It’s only really on Track 6 that Grønvold starts pulling some taut licks off his guitar while Laastad taps or thumps steadily away and the whole piece ends up becoming the stand-out track on the album with the guitar see-sawing unsteadily and tipsily through the track and odd chords at the shrill end of the guitar range hovering over proceedings like a UFO full of nervy aliens. Later tracks on the album may have a strong atmospheric feel close to bleached sun ‘n’ sand psychedelia.

For supposedly quiet minimal experimental jazz improv, this record has quite a few astonishing tricks up its sleeves. The overall sound is possessed of bewitching beauty and amazingly clear space. The two musicians really do seem to enjoy playing with one another, each pushing the other to explore the range of his instrument to the full.