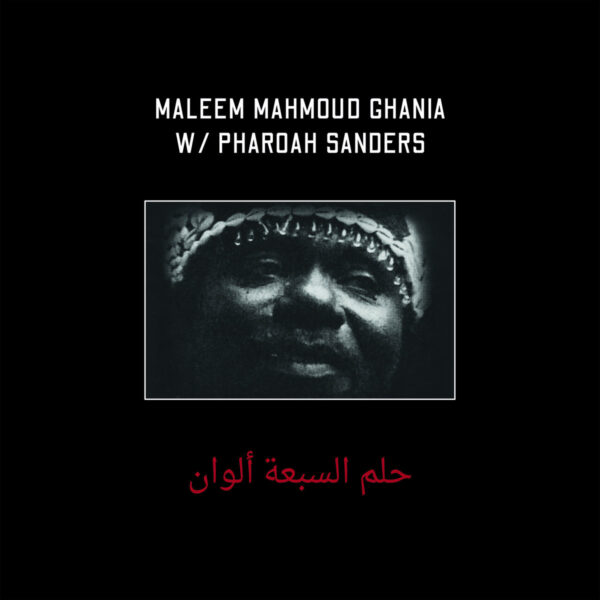 Vocalist, guimbri and tbel 1 player Maleem Mahmoud Ghania (1951-2015) was one of Morocco’s premier musicians who practiced the age-old Gnawa tradition; its main focus being the “trance music ceremony” in which particpants underwent some form of mystical healing and purification process. Coming after numerous home-grown cassette releases, …Trance… initially emerged in CD format on the Bill Laswell-piloted Axiom label, following Bill and avant-saxist Pharoah Sanders‘ jaunt to Essaouira, Morocco, in 1994, armed only with the barest essentials recording-wise. Two latterday Alan Lomaxes who certainly went the extra mile! And it’s not just the globe-trotting aspects either as the recording session involved over two dozen musicians coming through the door. A female vocal chorale and players of the ghaita (middle-Eastern bagpipes) and krkaba must’ve presented a whole different can of worms for Mr L. in the producer’s chair, especially so after tinkering under the hood of Lemmy and Co’s ‘Orgasmatron’ and overseeing Axiom produce by the likes of Praxis, Ginger Baker, and major guitar deity Sonny Sharrock.

Much like an earlier exhibit from a similar mindset, the Trance LP by Kwaku Baah and Ganoua (Island Records, 1977), one can’t fail to be swept along by the guimbri’s raspy thrum, the ancient of days vocal chants and the propulsive, sinuous power of the drum. But sadly one would imagine that Western mankind’s neural pathways to the ecstatic plane where gnawa holds dominion had been cauterized even before year one thousand appeared on the calendar. Yet, even with those restrictions in place, Seven Colors might still be a shade too real ‘n’ gnarly for the world music day tripper to embrace fully.

As to th’ Pharoah’s input, certain aficionados of the skronk (and sub-genres) have suggested that since being right horn man to John Coltrane and solo outings like Thembi and Black Unity, his later offerings have seen him blowing more cold tapioca than hot tamale. But luckily the taste buds can be primed for something with a little more tang. The early lyricism of ‘Peace In Essaouira’ and ‘Mahraba’ are certain attention-grabbers, but the track of tracks is surely ‘Hamdouchi’, a ghaita versus sax free-for-all that’s almost as exhausting to listen to as it surely was to play.

A challenging remit then all told and surely one of Mr Sanders’ more unusual entries to be found in his prnately ‘glyphed appointments book.

Cal me sentimental if you will, but rendering this gem in double vinyl format seems to be a way more fitting, more organic medium for a project that comes heavy in muscle, sweat and bone. Recommended.