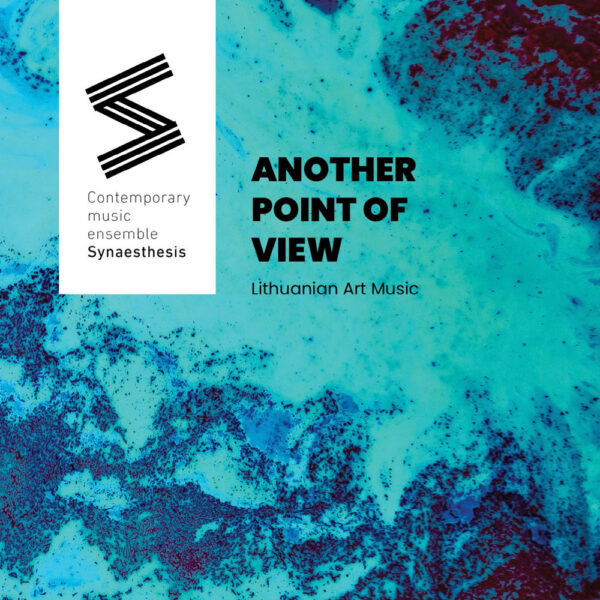 The origin of Contemporary Music Ensemble Synaethesis (CMNS) begins with two “…young and ambitious musicians…”: Karolis Variakojis and Dominykas Digimas, who put together this ensemble of twenty instrumentalists in 2013 partly in order to “…hear their music played rather than just imagine it…” The press release asserts that CMNS usually perform a repertoire drawn from the American post/minimalism tradition, but that Another Point Of View is drawn from the works of Lithuanian composers exclusively. The ensemble’s other repertoire includes works by Gérard Grisey, Terry Riley and Michael Gordon & David Lang (Bang On A Can). Bearing that in mind, it is probably no surprise that the reason this record exists at all is because it was able to secure funding from the Lithuanian Council for Culture.

On the inside of the sleeve is a staged photograph of the group of players; all young, ambitious…each sporting the same informal yet formal black shirt. The future awaits. They all meet the camera’s gaze: purposeful, driven. “For us, the name points to a certain pathway, out-of-the-box thinking, and openness…” says Karolis Variakojis. There’s an English/Lithuanian-language booklet included in the package with paragraphs of text about each of the pieces. Plus an essay by Vytenis Burokas. Here we find some apt descriptions of the works; Ricardas Kabelis’ “Cell” has “…three oscillating melodies…”, while Julius Aglinskas’ “State of Mind (Observance) features “…nine chords which swell and contract…” Elsewhere, we learn that Ramunas Motiekaitis is interested in “…ambivalence and ephemerality…” which we can hear in CMNS’ rendition of his piece “After Sunset Cycles”.

It is to be expected that a collection of so many differenct composers’ work may result in a sometimes patchy listening experience, and for me, this version of Rytis Mazulis’ “Canon Mensurabilis” seems a little out of place. The structure of this piece can apparently be compared to a “mathematical formula” according to Linas Paulauskis’ sleeve-notes. However, the cautious atonality on display here is not to my personal taste despite my attempts to reckon viscous equations from its ominous depths. On the other hand, the title piece Dominykas Digimas’ “From Another Point Of View”, here and there reminded me of Mark Hollis’ solo album in mood, or David Sylvian’s more abstract late 80s work. Glutinous swells, rolling bass tones and meandering violins. I have to admit that this is the piece I return to the most on this collection. This piece feels fresh; airy… new. At 27 years of age, Digimas is the youngest of all the composers included here; perhaps that has some bearing. Anyhow, it’s full of the calming deep drones and grimy treble artefacts I crave for my own personal mental relaxation systems these days.

The ensemble make fine attempts at KOAN by Rita Maciliunaite with its pointillist beginning and ASMR by Andrius Arutiunian, wherein some text in English is read by a female voice. Interestingly, the electric guitar part utilises some kind of attacking harmonic distortion that reminds me of The Ventures kind of guitar sound – twangy Mosrites. Strings and blown instruments threads interweave through piano chords and the tapping of a jamjar. The spoken text is pulsing, delineating: “I am now rubbing my hands against each other. They are getting warm. I quickly insert a small sheet of plastic between my hands. Otherwise I continue the same. A couple of small stones lay in my hand.” A violin chitters. All the parts punctuate each other. The piece ends with “I am now about to turn off the playback of this voice”.

For further insight into this project, there’s a short documentary/marketing film here.