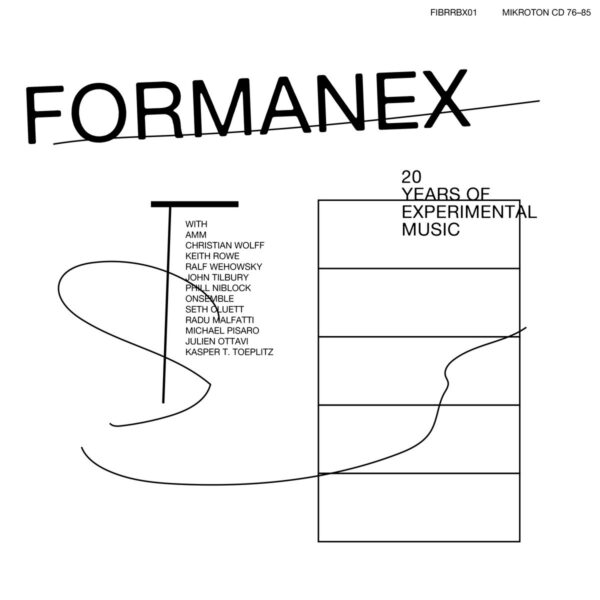 I have before me a 10-CD box set credited to Formanex and titled 20 Years Of Experimental Music (MIKROTON CD 76-85 / FIBRR BX01), and it’s jointly released by the Russian Mikroton label and Fibrr in France (with production input from Apo33 as well). My plan is to drip-feed reviews over a period of time as I slowly try and absorb this considerable amount of music.

As you can tell from the cover and the list of impressive names, it represents a good deal of collaborative effort, besides spanning a long period in time. Much to my shame, I never even heard of this France-based group before, and yet they’ve been around since 1998. Oh, the individual names in the quartet are familiar, particularly Julien Ottavi who has been cropping up here regularly; I tend to associate him with abrasive electronic noise (sometimes), and he also initiated these “internet concerts” which exploit live streaming in fascinating ways; the Digital Live Radio Session from 2001, which I do own, featured two other Formanex members, Christophe Havard and Emmanuel Leduc. The fourth is Anthony Taillard. Formanex today are a trio (minus Leduc) and are proud of their melting-pot of influences – electroacoustic improv, noise, punk rock, sound poetry, free jazz, and general sound art. You’ve doubtless heard these people in one combination or another, on this same label in fact, for instance in the NG4 quartet with Keith Rowe; and the recent record L’or, featuring Rowe, Ottavi, and Liedwart. I dare say Rowe has become one of their mentors, along with the group AMM, as they freely admit that they’ve been fascinated by the Cardew score Treatise since year 2000, after meeting with Keith Rowe.

Treatise became their cornerstone, or something very like it, and they built 20 years of music research on top of it; something about this score came close to matching their own ideas about music and group playing. From this fascination, I assume, came their first record (FIBRR 002) released in 2001 and containing their recordings of pages from the Treatise document, played at the Extrapool festival. The second album (FIBRR 004) soon followed in 2002, played entirely by electronics and one electric guitar, with guest Theremin player Laurent Dailleau. Then came the chance to play with AMM themselves, which happened at Festival Musique Action and was released as FIBRR 006 in 2003; Prévost, Tilbury and Rowe were all present and correct, along with Dailleau and John White. This might or might not be the same concert we hear as track one on the first disc (MIKROTON CD 76) here; it’s four minutes shorter than the original release, and the notes I have don’t provide all that much contextual information. 1 No matter. It’s a superb performance with much grandeur and moment, combining the rich frequencies of the massed electronics of Formanex with the spare, acoustic scrape of Prévost and the minimalist piano work of Tilbury. Rowe may sit somewhere in the middle of these soundworlds, as his tabletop guitar set-up was known to produce solid, dense hums at this time. I’m genuinely astonished not to have heard this before; AMM always manage to surprise me with the sheer quantity of their output.

This may not be a good time to admit I’m not an expert on Treatise. I looked at the matter briefly in 2018 when hearing the Split LP MICL LP 001, when a group called TwentyTwentyOne turned in a dispiriting interpretation of it. The original graphical score is not only lengthy, it’s also quite mysterious; all graphic notation (if indeed it is notation), symbols printed in stark black and white shapes, and no prose instructions or clues to the performers as to what to do, or how to interpret it. One would loved to have hear more from Ottavi, or other members of Formanex, as to how and why they regard it as such a “decisive element” in their own musical evolution; the booklet I have remains largely mute on the subject. Perhaps it’s all for the best; maybe Formanex simply like the open-ended nature of it, or the opportunities for chance operations (Cardew was still influenced by John Cage when he wrote this during 1963-1967). Traces of that spirit are detectable in other Ottavi works I have heard.

For track 2, we have another recording of pp 46-47 of Treatise, this time played by AMM, Formanex, and ONsemble all working together. ONsemble appear on other discs in this box, so now might be a good time to meet up and shake hands; like Formanex, the musicians here are based around Nantes, and include Tristan Ikor, Romain Papion, Benjamin Jarry, Clara Bodet, Mael Foliard-Legal, and Jenny Picket. On this undated recording, that’s a lot of talent on stage; overall it’s mostly acoustic instruments, with the electronic components confined to the hands of Havard and Ottavi, unless you count the three electric guitarists. Two bass players, and a cello too; delightful for those who love lower register and bottom end in their dose of improv. AMM were once graced by a cello player (Rohan de Saram) and it suits their music. This segment of Treatise must indicate something about the depth of the score; it’s clearly possible to extract a good deal of variety from it, as it’s manifestly different to the first longer cut, which is cold and slow in its haughty grandeur. Here the music feels like a slightly more joyous event, allowing a kind of wide field which allows and encourages a lot of participation. I shan’t say it’s more chaotic, but there is a passage where a Brian Wilson song is unexpectedly admitted into the fold (perhaps courtesy of the famed Rowe transistor radio), and the effect on the gathered company is quite electrifying.

I haven’t heard much of AMM members playing with other groups as large as this before (save perhaps the Music In Movement Electronic Orchestra), and the revelation to me is how well it works here; one has tended to perceive AMM as a rather hermetic unit, guarding a secret of which they alone are the holders, yet here one senses much more permeability in the musical actions. A very strong 28:43 of solid music, with remarkable shifts in dynamics and volume; at its most dense, the layers of sound clustering around us are almost too much to handle, and it’s ecstatic. In fine, a corker of an opening to this box; tune in next time when we open Disc two. Released in October 2019.