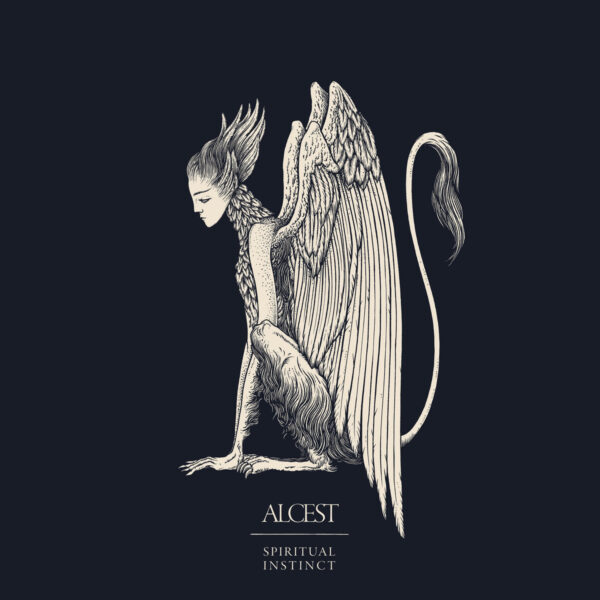 After 20 years, this French post-BM / blackgaze institution is still going strongly, having stormed back in 2019 with 6th album “Spiritual Instinct” after a break of a couple of years starting in 2016. After a number of full-length works of dreamier melodic music with a shimmery-warm radiant feel, since copied by other wannabe post-BM / blackgazer bands across the globe, Alcest returns with a harder, tougher, grittier sound. At least on the early tracks of “Spiritual Instinct”, the music powers ahead as straightforward melodic post-BM with a dark mood and some tendencies musical and lyrical alike to questioning one’s purpose and place in life, and to the feeling that another power exists outside the immediate material plane on which we all live.

Songs are consistent in style and performance, even in pacing and emotional tone, with a minimal range of instruments used (lightly gritty guitars, thunderous drumming, keyboards used in the background for ambience) and a vocal ranging from harsh and sometimes shrieky BM rasp and chant to clean soulful singing. The harder aspects of Alcest’s sound – usually in the actual music itself, in the frizzly tremolo guitars and the powerful drums – contrast with and are balanced by the singing (if this is clean in tone), the melancholy melodies and a smooth, clean production that allows everything to be heard clearly. “Sapphire”, one of the middle songs in the album, is a good example of Alcest’s general style – for me, this is one of the lesser songs on the album, and once listeners are familiar with this, they can skip it for other, better tracks.

The better tracks include “L’Ile des Morts” which scores by way of some very powerhouse drumming and long passages of instrumental music that combine atmospheres of longing and yearning with lite-noise BM tremolo guitars. Indeed, any time the singing is out of the way, the music improves far out of sight, with all its energy, born out of uncertainty, even anger at the current state of society and human spiritual evolution, unleashed. “Les Jardins de Minuit” is a meaty, very gritty song of fierce burning post-BM aggression with hammering drums and shrill soaring lead guitar. Parts of “Protection” are very good but these tend to be the instrumental sections of the song as the sung passages seem to dampen the energy and aggression with their sorrowful tone.

While the technical execution is excellent, and Alcest musicians Neige and Winterhalter pour their hearts and souls into all that they do, the songs do sound much the same, and once you hear one song, you can predict what the others are like. There is energy in the music but not much in the way of real zest and enthusiasm. After 20 years in this post-BM / blackgaze business, Alcest has settled very comfortably in a niche and appear uninterested in straying very far musically or springing surprises on themselves and their audiences.