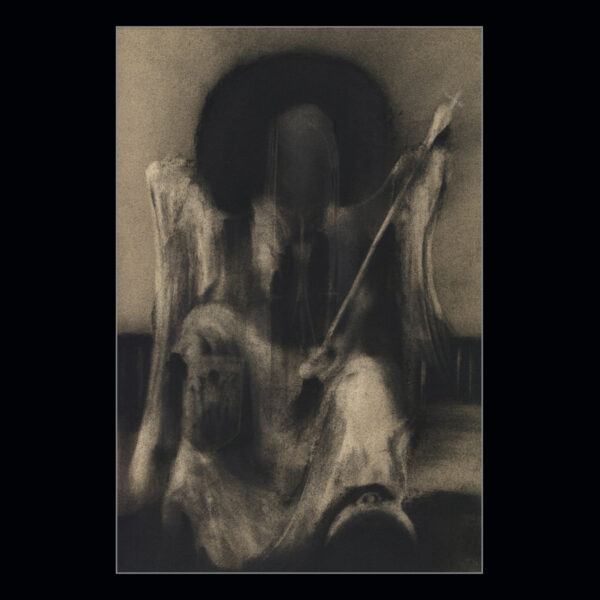 Of all the many black metal bands that have attempted to replicate something of the spirit or splendour of legendary French black metallers Deathspell Omega with their distinctive dark dissonant guitar sound, the sinister atmospheres of their recordings and above all the metaphysical themes and questioning that inspire DsO, who’d have thought that the one band that most challenges DsO in sheer ferocity and menace turns out to be an equally mysterious fellow feral French project called Amnutseba? Like DsO, Amnutseba deliver (or delivers: I have no idea if Amnutseba is a band or a solo project) chaotic shape-shifting black metal in damn-the-torpedoes-full-speed-ahead overkill style, with dark jangly atonal guitars bewitching unwary and innocent listeners into a strange trance and huge banks of insane nuclear-powered percussion machines pummelling those same innocents’ brains into schnitzel mush. The reptilian vocals and samples of spoken-voice recordings are cold and clear with an unearthly ethereal quality, and the way they come in and out of the music is deeply unsettling. The music is layered in such a way that as a whole, it is dense and brutal, yet the separate instrumental and vocal parts are surprisingly frail and sketchy, seemingly lacking in substance.

As a short album, “Emanatism”, the debut full-length for Amnutseba, is best heard as a whole to experience the full chaotic sonic universe in nearly all its evil occult ritual majesty – with this style of music, you can always sense there is more, much more, behind what is offered, as though bands like Amnutseba and DsO are truly mediums between this physical universe and another that exists in parallel, an evil and tumultuous universe, and moreover which probably helped birth the universe we know – though those of us who feel ourselves to be frail in spirit and psychology might want to take this album in bite-sized pieces.

The odd thing is that together the five songs that appear don’t sound greatly different but individually their distinct characteristics become apparent. “Abstinence” and “Ungrund” sound much like straight-out DsO though the vocals here may be a lot more crazed. The later tracks from “.” onwards are completely unhinged with shrieky bone-dry phantom vocals and the most demented beats this side of a demonic mental asylum in Hell. A layer of electronics-based effects and sampled voice recordings, and a constant running line of gabbling demon voices add to the disoriented, queasy chaos in tracks like “Dislumen”.

In a year already turning out to be a Golden Age for French black metal, with so many bands releasing superlative works of utmost terror and derangement, and still another six months to go as of this time of review, “Emanatism” might just pip the lot of them for utter chaos and terror, and take out the award for The Best French Black Metal Album of 2020. What sort of demonic celebration will ensue in the subterranean labyrinths beneath our feet, I’m not hanging around to find out …