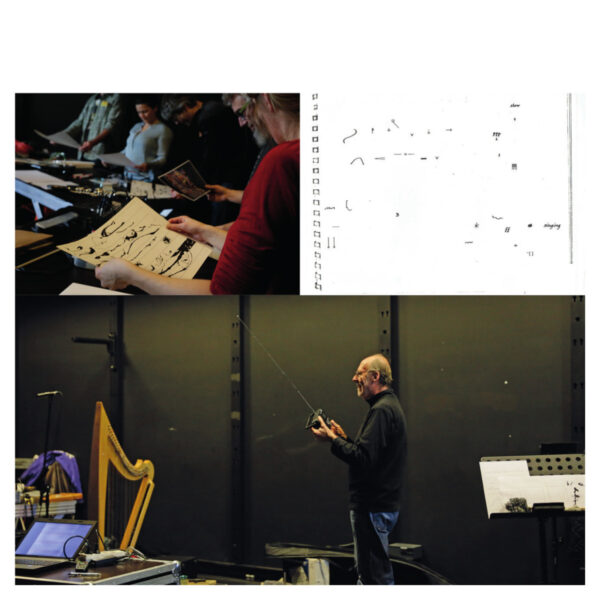 Disc four contains two long pieces by Phill Niblock, that notable master of single-minded minimalist drone from New York, as performed by Formanex and ONsemble (this took place in 2014). Up to now the box set has been showing us the “conceptual roots” of Formanex by showcasing their interpretations of 20th century masters; Niblock is one of many living contemporary composers whom Formanex invite to their experimental picnic. When they get the engraved card in the mail, they are usually asked to bring a score or project and, to some extent, tailor it to the needs of the French players, regarding the players and the instrumentation available. This too is a collaborative process; imagine working with Niblock to realise these versions of ‘Disseminate’ and ‘To Two Tea Roses’. As it happens, we heard a version of the ‘Tea Roses’ piece not long ago, performed and recorded by Ensemble neoN on their 2019 album Niblock / Lamb. The Norwegians had their own ideas as they created an all-acoustic version, making good use of the bowed vibraphone, and to my way of thinking they “opened up” the space of Niblock, a composer whose work often comes across to me as rather airless, so tight are the joins among these multiple layers of sound he commands.

On today’s spin, I’d say that Formanex and ONsemble are leaning towards the claustrophobic mode, particularly on their rendition of ‘Disseminate’, which is both eerie and slightly unsettling; it feels like there’s a slight, maybe pre-planned dissonance happening somewhere in the middle of this teeming swarm of strings and woodwinds, electric guitars and electronics. However, I’m always ready to admire the discipline and technique required to sustain this kind of unvarying, single-minded dronery for 22 and 23 mins. At one time it seemed to me that the optimum way to experience Niblock was through playback; his work consisted of making multiple overdubs of instruments, best heard in on the composer’s own stereo system at his apartment. It’s great that this somewhat unconventional method of composition can translate into live performance, and our French teams turn in an excellent job. I find there have been at least two recorded versions of ‘Disseminate’, one of them arranged specifically for the Belgian Q-O2 Ensemble, suggesting it’s another one of these semi-open scores where certain permutations in the arrangement and subtle variations are permissible. The ‘Tea Rose’ piece has something to do with an anecdote about Walter Branchi, the details of which I forget right now.

With disc five, we have a performance of a Keith Rowe piece called Hang Ups, dating I think from 2015. The booklet provides useful contextual notes; I don’t seem to have heard many compositions from Rowe, whose genius I mostly know as a performer (his A Dimension Of Perfectly Ordinary Reality is a real guitar blaster, matched only by Harsh, Guitar Solo). Rowe has elected to create a modernist “update” on the famed Mussorgsky work, Pictures At An Exhibition; this is one of those classical pieces which has somehow become incredibly popular, maybe because the tunes tell “stories” (they match up to paintings by the Russian artist Viktor Hartmann), maybe because of the repeated ‘Promenade’ theme that links the tunes, and of course the Emerson, Lake and Palmer connection – I expect that for many fans of prog rock in the UK, their knowledge of classical music begins and ends with Pictures At An Exhibition.

Rowe is a painter himself, and well-informed about modern art; he selected paintings from this rich history of abstract expressionism, conceptualism and pop art which have been used as the basis for this piece, and not only that he details the techniques that were used to make the original paintings, along with musings about how long they took to complete. Duration – a feature often highlighted by experimental music (and experimental cinema), but not so often applied to fine art painting. Rowe makes a good case for claiming a 1977 painting by Agnes Martin as having “a floating translucent quality, resulting in music as time.” These sympathetic observations, applied to a shopping list that includes Pollock, Rauschenberg, Twombly, Richter and others, are likely to be the result of hours of diligent staring in the art galleries of the world, now recast into musical form. I believe it’s structured as a multi-part suite, and even includes Rowe’s take on the ‘Promenade’ theme to link the pieces together. There the resemblance with Mussorgsky ends, and this porous, slow-moving set of abstract music is unlikely to have been picked up by ELP any time. Astonishing, alien sounds express much about the shock and strangeness of abstract art, and how audiences interact with it (or otherwise); abrasive guitar scrapes, odd percussion, and heaving drones are just some of the results captured on this disc. Once again, an unusual compositional method 1 which is meat and drink to the Formanex plan; based on a judicious selection of paintings, and a deep knowledge of the surface of each canvas, translated into sonic equivalents. Full marks for innovation and imagination to Rowe, and a great performance too. Released in October 2019.