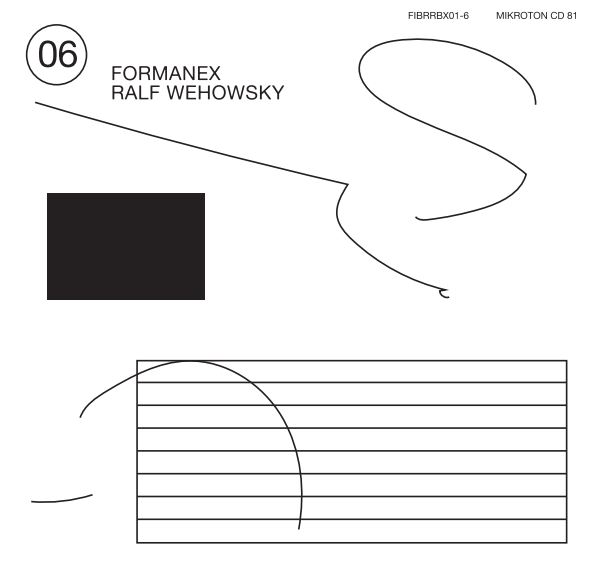 The sixth CD from the Formanex box set (MIKROTON CD 81). This may be a generalisation, but the collection seems to have featured a lot of acoustic playing thus far, an observation I make since today’s Flying Fortress totally derails that trend. It’s three pieces credited to Ralf Wehowsky and Formanex; I assume this formidable German master of many trades was on the invitation list for these recordings made in 2005. Played by Emmanuel Leduc (guitar, electronics), Julien Ottavi (percussion, laptop, electronics) and Anthony Taillard (prepared guitar). The same lineup, plus Christophe Havard, appeared on the Herzblutanteil (I.K.K. IV) record released by Waystyx, with an excerpt from a 2004 performance.

Wehowsky, or RLW as he often appears, is one of those rarities who occupies his own tiger-balm zone in a hollowed-out and burned piano in the post-holocaust landscape of modern music, and has done many recordings of such high quality that the avian kingdom salutes him as one of their own. While his work with P16.D4 may be the rawest and the strongest meat in his reticule, and the easiest to characterise as “industrial” music or inspired by same, he has never followed rules and his inspirational godhead has always shone with striking and innovative ideas. On today’s record, no titles to fence in our freedom of thought; the first of three precisely 30:00 mins offers much in the way of intense, formless noise-barrages along with dense and labyrinthine buzzing drones, forming an elaborate and exciting construct. Formanex turn in an exceptional performance of wild electronic actions, each utterance delivered with conviction and power. The possibilities suggested by this single piece are considerable, but there’s also shades of the night curling at its edges, a dark prophecy as much as it is a promise of hopeful times. Would like to know more about the circumstances behind this collaboration. Perhaps it was a Faustian pact, signed in secret, on a remote corner of the Formanex island.

My tastes run deep for this hellish tract of negativo-energy aggresso-punch, but the next piece at 10:33 has its silver qualities lined up in a row and delivers the mail in quite a different manner. It’s just plain odd; Ralf Wehoswky can excel at making strange and alien statements in sound, and here his guiding mitts have steered the French players down a pathway of whimpering voice sounds and attenuated creaks. There’s also something crazy going on in the far distance; the more you listen, the closer looms the insane asylum. Yet these tasty textures and fading moments can’t help but hold our attention, as we watch bizarre birds and bats flit overhead. Surreal, near-nightmarish stuff for sure. Third of three clocks in at 17:48. This one continues to use the voice elements – probably samples? – detectable in tk two, only more prominent, with more repetitions; around the mid-section it’s highly reminiscent of Gesang Der Junglinge by Stockhausen, and I see no reason why Ralf can’t step up to the pedestal to be lauded as the most exciting composer in Germany today, except that he may not have the aura of official approval lent by the Akademy. Another restrained piece, this one, quite enticing after the assaultive mode of the opening 30 mins, and along with the voices are layers of controlled static, buzzing, soaring drones, feedback…Formanex seem to be hugging their black boxes and tabletops in delight as they studiously enact this remarkable abstract causeway into the inner mind.

One has enjoyed the avant-classical elements of this set, the graphical scores, and those composers who make formal experiments within the composition-improv divide, but for sheer radical ideas and intuition, applied with the assurance of an exiled scientist, you can’t beat Ralf Wehowsky for my money. Released in October 2019.