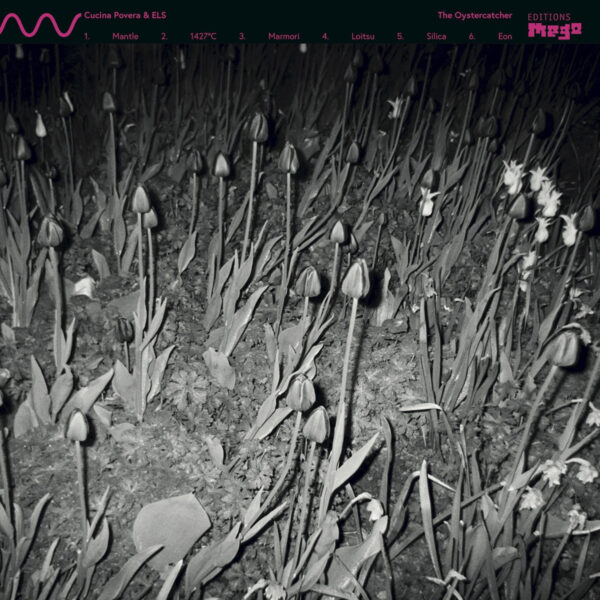 Here is a very powerful and deeply affecting recording based on a short story written by Finnish writer Tove Jansson (1914 – 2001), famous for the Moomin series of children’s books. The oyster catcher is a bird that travels freely between the earth, sea and sky. A dead bird washes ashore and two different versions of how that bird died are presented. This collaboration, the first between Cucina Povera (the minimalist project of Glasgow-based Finnish sound artist / musician Maria Rossi: the name “Cucina Povera” originally refers to an Italian approach of cooking using whatever ingredients are immediately at hand) and ELS aka Edward Simpson, presents two narratives or forces, initially opposed to each other but gradually converging to agree on the same conclusion as to the bird’s fate. Rossi’s plaintive fragile vocals, seeming to drift and always on the verge of falling away, confront Simpson’s powerful electronics in a dark grim space. The presentation is very sparse and the two artists seem to be separated by a massive deep gulf, even though in reality the two worked closely together, improvising and recording in London over two days and taking photographs of tulips in the dark for the album’s artwork during a trip to Helsinki. The artists edited the music in Rotterdam – so they surely did as much travelling between the earth, sea and sky as the subject of the album would have done!

As the album progresses, listeners get a hint of how voice and electronics initially travel their own separate paths, bristling at each other’s presence (with the contrast between the two serving to emphasise each artist’s distinct qualities, Rossi’s most of all paradoxically: one might have expected the synthesisers to drown out her pensive singing) and later to adjust to each other’s point of view and narrative. Perhaps it is the way I have grown up listening to music over the years and the types of music I listened to in the past when I was growing up, hearing mostly song-based music with a singer and backing music, but I tend to hear Rossi as being supported by the music (which grows more delicate with each succeeding track) throughout rather than the voice and electronics taking turns to lead and support (or oppose).

The tracks are very song-like, even allowing for the sparse, fragmented nature of Simpson’s electronics. Those tracks that impressed me the most were the darkly brooding “Silica” and the final track “Eon” where the electronic beats and tones end up being even more fragile and insubstantial than Rossi’s vocals which now sound robust if still questioning. On this last track the artists really seem to be pushing each other, as much interrogating each other and getting a rise out of the other’s response, as they are pushing their own narrative and coming to a convergence. Rossi’s voice even seems to develop a noisy edge.

While earlier tracks are a bit ho-hum, the last two tracks make up for them with sheer dynamic noisy voice-synthesiser interplay and at the end of the album, I feel quite satisfied that the artists have come to some agreement, even if they all they have done is agree to disagree.