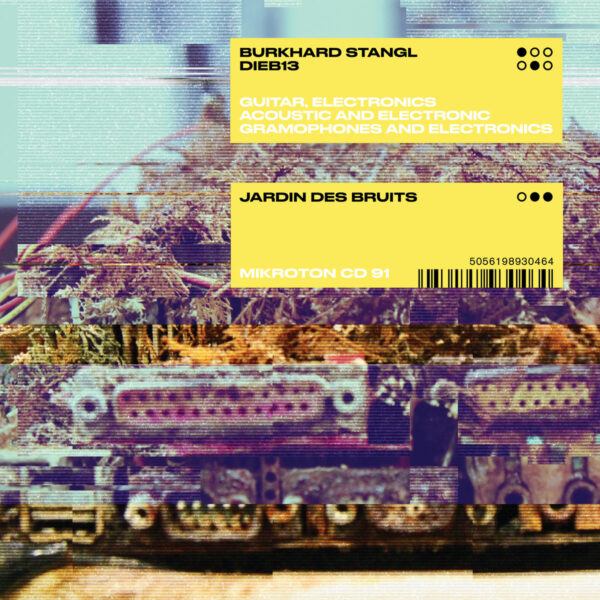 On Jardin Des Bruits (MIKROTON CD 91), we’ve got a very strong team-up of two Vienna-based players, the guitarist Burkhard Stangl and the electronic-type guy Dieb13 (i.e. Dieter Kovacic). With a generous array of 20 tracks, we’ve got a kind of electric guitar meets glitch thing going on, although it’s also fair to say it harks back to the times of electro-acoustic improvisation (EAI). Lest we forget, these two made a record called Eh for the Erstwhile Records label in 2002, at a time when EAI was highly regarded and causing a lot of interest in the mouths and ears of many listeners, and that particular US label did more than its fair share to represent this mode or style of performance.

I suppose Jardin Des Bruits does revisit that particular snapshot of musical endeavour (there’s even one track called ‘Eh’), but it also updates the scroll to reflect the current interests and activities of these two gifted players. One such trend might be towards a certain simplicity; I’m digging the uncluttered surface of this Jardin, a corner where there aren’t too many notes going down and we aren’t distracted by an excess of surfaces and effects. Maybe both chaps are slimming down their already lean musical stomachs and subsisting on a diet of crispbread. As part of this approach, both Stangleroo and the Diebster leave a fair bit of space for each other’s statements and utterances, yet don’t feel the need to sign up to the precepts of the ultra-quiet school of playing. There’s also a tremendous amount of variety in this Garden, as though both have been cultivating some nicely variegated crops in their respective greenhouses, and are now planting out some choice specimens for the fete. If you like your coleslaw served quiet and slow, you’ll be well served by many tracks, but for those with a taste for the carnivorous roar of a tiger, you can click directly on (as I did) to track 06 which is called ‘Noisy Track’ and soon feel yourself run over by a double-decker tapir.

To recap: simplicity and variety…to which I’ll add a third virtue, that of brevity. There are only about three or four exceptionally “long” workathons on this horse, while the remainder are short experiments in making a statement that doesn’t exceed the two-minute limit. Matter of fact one of them (‘Symphonie Nr 94 G-Dur’) is only 24 seconds long, a brilliant three-part suite that combines minimal bass tones with a spontaneous vocal shout, thereby expressing the possibility of a meeting between Toshimaru Nakamura and Henri Chopin; yet this gem finds itself bested in the shortness stakes by the 13-second ‘Miniature Essuyer’, wherein Martin scrapes and rubs his strings with the officious attitude of a state-paid laundry worker doing the ironing. And if that doesn’t quench your thirst for the miniature, try ’11 Sekunden’ – yep, only 11 seconds of joy, obviously an edit from a much longer episode – but they picked the right moment of textured deliciousness to present tied up with a bow. Well.

Of the longer trip-out marathons, you may find yourself strangely drawn to the slow magnetic hum of ‘Die lange Ruhige’, which is a fine river of crackle and gentle drone where both our fine gentlemen exhibit considerable restraint and iron control of their feedbacks and their processing units as they paddle their canoes down this frozen sludge. There’s also the long opener ‘Helmholtzresonator’ which clocks in at 9:50, but while nice enough this one struck me as too much glitchin’ and not enough bitchin’, even though it is pretty “keeno” to namecheck ol’ Helmholtz, that Prussian-born physicist of the 19th century who had such an influence on Charlemagne Palestine with his ideas about tones and frequencies. In fine, a contemporary doubloon worthy of your sponduliks. Plenty more tasty examples of guitar-electronic interplay to be enjoyed on this rich recording. From 9th January 2020.