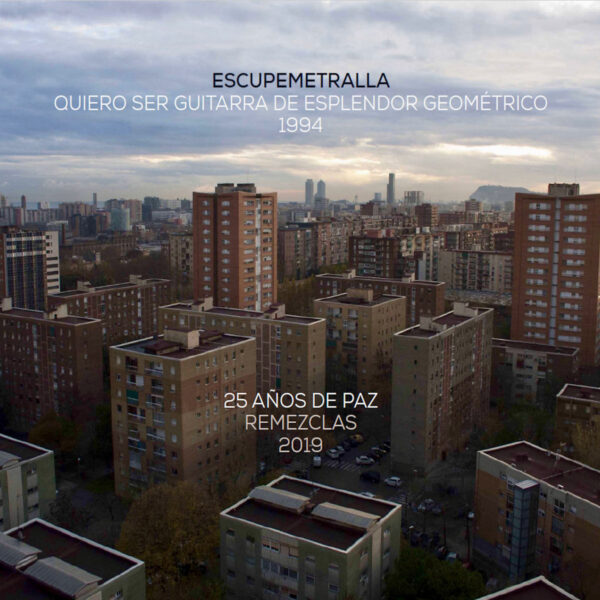 We have a fair bit of clocking time reserved for Escupemetralla, a spirited duo from Barcelona who make unkempt and noisy rhythmical music when left to their own devices, heavily influenced by industrial and experimental strains from the last 30-40 years, and we first heard them on their 2017 release Poison Of Dead Sun In Your Brain Slowly Fading. The duo (if indeed that’s what they are) remain anonymous, and all in their literature and their noise they exhibit a flagrant disrespect for just about anything, especially authority figures and large organisations.

This abrasive trend continues on today’s release from the cheeky monkeys, a two-discer which bears the lengthy title Quiero ser guitarra de Esplendor Geométrico – 25 años de paz – Remezclas (N0VAK NVK078). That whole sentence needs a bit of unpacking, but we’ll start with the first bit which translates into English as ‘I Wanna Be Esplendor Geométrico’s guitarist’. Apparently a song of this title was laid down by Escupemetralla in 1994 and included on a comp called Noise Club Uno issued by Por Caridad Producciones. With this cut, the duo paid homage to that most influential of Spanish Industrial bands, Esplendor Geométrico, who made their first single in 1981 and whose first LP is now a major collector’s item…I never heard this band, but I’m assuming they are well-regarded proponents of depressing and angry noise, and it’s not clear if they did it using guitars. Escupemetralla evidently wanted to set out their stall and make plain their musical tastes in the most obvious way possible, and perhaps put in a bid to reinforce the importance of Spanish noise music on the international map.

So far so good…today’s double-CD set thus offers a large number of remixes and versions of that song, 25 tracks in all, with elaborate variant titles and many of them probably representing quite a departure from the original source material. That’s just a guess, but every cut goes its own wild way. There’s a long list of names which it is superfluous to cite. Be prepared for a lot of noise, a lot of beats, and a lot of unpleasant grinding textures to ruin your day. I started to find it pretty nauseating after extended exposure, but I expect the point of it is to restate the Spanish connection even more emphatically – most of the contributors to the project are Spanish, and are also “musicians with whom Escupemetralla feel deeply connected”. Even the original band Esplendor Geométrico appear on the first disc, providing a remix of the song which is all about them and directly inspired by their music. At this point it started to look a little too self-referential for me, but there’s no denying the enthusiasm and love that Escupemetralla feel for this music, and there’s a lot of energy and mutual admiration going down in these sickening grooves.

The other aspect we must mention is the political statement. The entire release is intended as a spiteful stab at the Franco dictatorship, an oppression which was felt in that country until 1975; Escupemetralla grew up under its shadow, specifically in a district of Barcelona called La Paz which, despite its soothing name, was the site of some hideous concrete tower blocks. Franco coined a motto in 1964 “25 Years of Peace” to pat himself on the back regarding this town planning achievement; Escupemetralla have co-opted that motto, détourned it, and put it to use in a sarcastic manner as part of the title of this record, along with a poignant photo of that brutalist array of buildings. “Remezclas” translates as “reclaimed”, which declares their intentions to snatch back some political capital from the Franco years; but since the word can also translate as “remixed” – well, need I say more.

At two discs, there’s a lot of music and this does feel a little overdone to my tastes, but I do see why they had to notch up the quota of submissions to 25 tracks in order to match the 25 Years of Peace; and any comp that includes Macromassa must have good intentions. Arrived 16th January 2020.