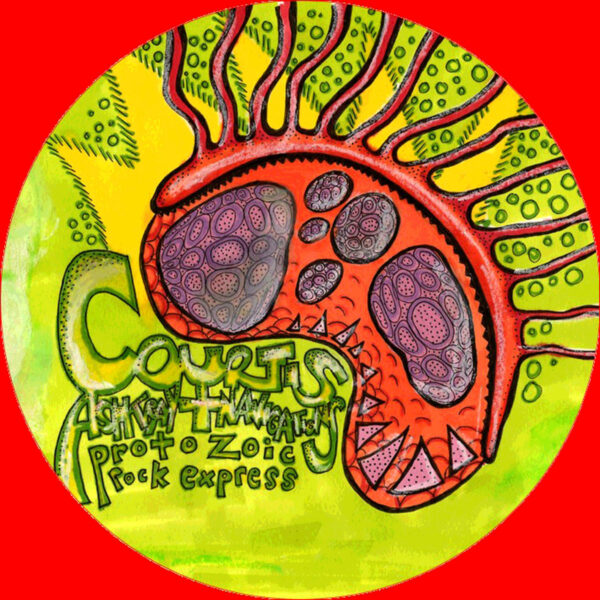 On Protozoic Rock Express (PUBLIC EYESORE 144), two of our personal favourite musicians collaborate and make a record for the American Public Eyesore label. Phil Todd is Ashtray Navigations, who continues to release his home-made music in prolific quantities and remains impossible to pigeonhole, although the last time I heard him play live he was exhibiting a certain convincing take on psychedelic rock and letting fly with his considerable guitar skills. In the earlier days of TSP magazine, we often associated him with long-form drone noise, which he produced using his own DIY methods and which sounded like nothing else in that genre. As to Anla Courtis, the eccentric genius from Buenos Aires, following his exploits with the bizarre Reynols project he pursued a solo career where he too has been exploring the possibilities of his guitar and also rethought himself as an electro-acoustic composer.

On this release, they both play guitars, plus there’s synth and moog work from Phil, and various sampling keyboards; Anla plays organ, percussion, and bowed metals. Since the record is reported as being made in Leeds and Argentina, it’s not clear if they ever met up in a studio and it might has been patched together from separate contributions. This Protozoic Rock Express is certainly not “rock music”, nor is it an “express” train; turgid and monotonous, it crawls along with the pace of a sluggish tow-truck overloaded with concrete blocks, trying to make its way through a dark swamp. Divided into three parts, the music is interminable and shapeless, but once you get past these basic obstacles you should find enough immersive drone elements and interesting instrumental details to engage the body’s dimensions and passions. There’s something to be said too for the remorseless manner in which the music unfolds, barely giving a man a chance to breathe as it covers the whole listening platform in its thick green slime and overcharged fug. And I like the way the artworks combine and incorporate the doodling styles of both musicians.

If I’m reading the dates (2004-2010) correctly, it either took them six years to make it, or perhaps it combines old recordings selected from a number of years. Arrived 8th January 2020.