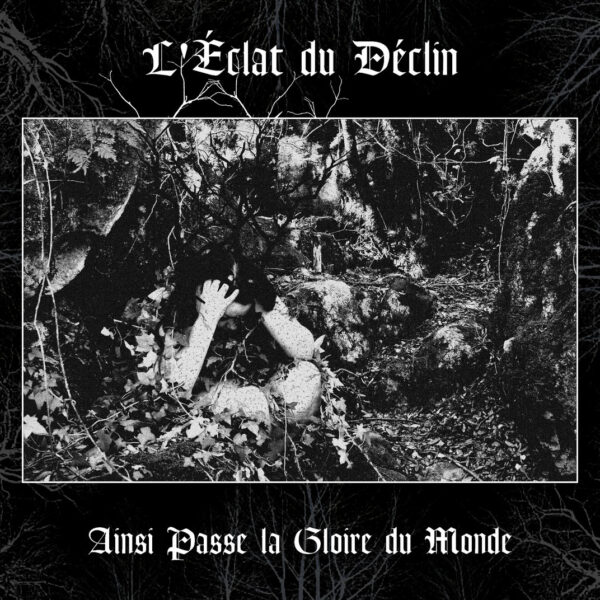 Fittingly for a band rejoicing in the name of L’Eclat du Déclin – we can see Julien Hovelacque, sole member of the band, isn’t too concerned about whether LEdD will be accepted in non-Francophone music territories – its debut album also glories in a title that translates into English as “So Passes the Glory of the World” (or “sic transit gloria mundi” for the Latin scholars among us), referring of course to the transient nature of life as time grinds by, and to the inevitable decline and passing of civilisation, and Western civilisation in particular. LEdD plays blackened death metal (or black metal with death metal influences) with progressive rock and even some symphonic / orchestral elements, all done with considerable flair and not a little operatic flamboyance. I had heard an EP from this act some time ago – this was “Mater Tenebrarum” (meaning “The Mother of Darkness” in English, and quite possibly referencing Italian film-maker Dario Argento’s horror film trilogy that includes “Suspiria” and “Inferno” – methinks Julien Hovelacque’s projects are going to get frequent reviews here at TSP, he sounds like such a cultured gentilhomme!), released back in 2018 – and to be honest I thought there was too much bombastic stereotypical synthesiser orchestral music on that recording. Here is hoping that on this album Hovelacque has shaved off that excess from what should be raw melodic black metal aggression throughout.

After a few rounds with the album, I’m happy to report Hovelacque has indeed skimmed off all the synth-generated bombast and slimmed the music to its essential raw melodic black metal core, this time around (as opposed to “Mater Tenebrarum”) featuring some depressive BM and post-metal elements. The album has a very clear, pristine sound which highlights details of nearly all instruments, even those that sound far off in the background, and helps give the songs an impression of considerable atmospheric and emotional depth. The multi-voiced singing which can include raspy BM vocals and clean vocals on most tracks can be theatrical and even clownish, and may be intended to recall Grand Guignol theatre where brutally naturalistic horror shows featuring gory special effects alternated with comedies to heighten the emotional tension for audiences. The songs aren’t greatly different from one another in style and emotion, and the exaggerated emotion in some songs, and the way it swings from one extreme to another, can be overwhelming.

The title track comes in the middle of the album and brings in a melodic and darkly atmospheric style of post-metal, still with some blackened elements in the singing and the texture of the guitars, combined with prog rock influences. This trend towards darker atmospheric music with progressive rock, a touch of blues and some orchestral touches continues in “La lumière du temple” and “L’ineffable”. Listeners may well believe Hovelacque is striving for a soundtrack effect with these songs as the instrumental music is often highly atmospheric but in a very bleak way.

The music is complex with layers of instrumentation, all going at a fast speed, and Hovelacque is adept at playing all instruments at a consistently good level and recording everything so that the entire album sounds like the work of a band rather than one individual. There is much emphasis on mood and atmosphere even though a limited set of instruments – guitars, bass, percussion, sparing minimal keyboards, multi-tracked vocals – is used and there’s no resort to sampling found sound recordings. This album is a solid effort and a straightforward black metal / prog rock foundation on which Hovelacque / LEdD can build a bigger and more varied body of music.