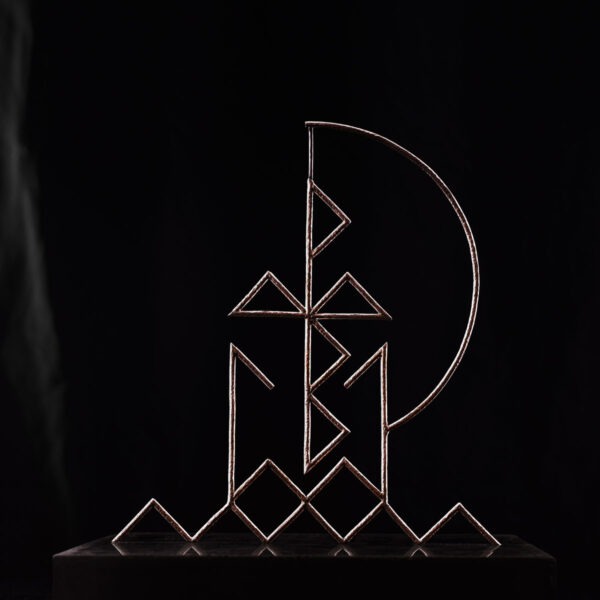 Some nice lugubrious instrumental music from Pulled By Magnets, a London trio led by drummer Sebastian Rochford from the jazz band Polar Bear (who I never heard, but were nominated for a Mercury Prize). Neil Charles plays bass, and the sax player is Pete Wareham. Maybe it’s the way that Rose Golden Doorways (GLITTERBEAT / TAK:TIL GBCD088) is recorded, but Wareham issues a positively spooked sound from his bell, every plaint seeped in a strange melancholy and angst. Also much to recommend in the sparse playing of the trio, leaving plenty of dub-inflected spaces for each other, and the understated use of electronics. Hard to pin down, this emotive music isn’t really jazz, rock or anything else that could fit under a label, but does evoke strange sensations of dread and will feed your pessimistic side until your heart is rubbed full sore. Apparently Polar Bear did much the same, credited by listeners with that yearned-for “end of the world” anthemic slant we were supposed to get from the lamentable Godspeed You Black Emperor (but never did). As an album Rose Golden Doorways may have a few saggy moments, but the rapport between the three is strong, and the group sound verges on awe-inspiring. Probably a good band to see live in a darkened venue. From 31 January 2020. Feeling underwhelmed and bored by Laurin Huber‘s Juncture (HALLOW GROUND HG2099) record…this fellow is a drummer from Lucerne also involved in various Swiss underground music things, including the “darkwave” synth band Wavering Hands, and appearing on the label Edipo Re which he co-founded. Juncture may be his first solo record released under his own name. Nothing wrong with the thoughtful and well-groomed production of this techno-ish ambient record, but I’m disappointed by the lack of adventure. Not only are the sounds pedestrian and over-familiar, but his sense of rhythm – surprisingly perhaps for a drummer – is very limited, meaning the track ‘Hostage To History’ which is evidently meant to move forward grandly like a vizier informed with a sense of of its own importance, simply strolls along like a suburbanite taking a walk to the corner shop. Huber bolsters his work with grand designs and multi-syllabic words, proclaiming his plan to work with “superimposition, interactions, interferences and modes of co-existence” – to put it more plainly, he layers, like everyone else these days. Very dull. From 31 January 2020. Another Swiss fellow is Bit-Tuner (i.e. Marcel Gschwend from St Gallen), who arrives with his EXO (OUS027) album on the curiously named -OUS label. I’m already out of my depth with someone who has been influenced by the “early dubstep era”, as this is one of many splinter developments in electronic music outwith my ken. This EXO is a departure from his previous releases made for Hula Bytes, The China Syndrome and The Japan Syndrome, since they used field recordings and this one represents his attempt to “do” film soundtracks – or at least let us know that he’s interested in that field and hopes that it’s an influence that rubs off on him in some way. He’s also trying to represent something about the economic and social plight of Greece, where he stayed for a couple of years. At least he has some grasp of melody and composition, unlike the soft-centred Huber, above; even so I found the pace sluggish, the keyboard sounds unmemorable. Melodies lack any tonal centre, and drift apart in a morass of uncertain direction. It’s hard to make out anything remotely “cinematic” about these sprawling, samey pieces, nor can I discern any emotional truth if he is indeed trying to tell a story about the effects of economic decline on Greek communities. To be honest, he just sounds bored. From 31 January 2020. T.U. is Luca Favaro, a contemporary Italian fellow who has made the not-bad record of ambient electronica Rite (FALSE INDUSTRIES False028). Like a lot of those who chance their snappers in this area, he’s after some vague “sense of place” and wants to create, or at least suggest, an environment for the listener to wander in. If he has managed this, he himself seems afraid to explore it; all the tunes feel like a tentative exploration of this new land, as if afraid to break a twig or brush against a leaf, for fear of disturbing the tranquil mood. However, it’s this unassuming side to Rite that makes it all the more endearing; Favaro doesn’t appear to be making any undue claims for his art. The label press however waste no time in reminding us of his “producer” and “composer” credentials, the latter endorsed by Luca’s background in contemporary classical music, theatre, and ballet. Unobtrusive washes and burrs for background laundry days…From 31 January 2020.