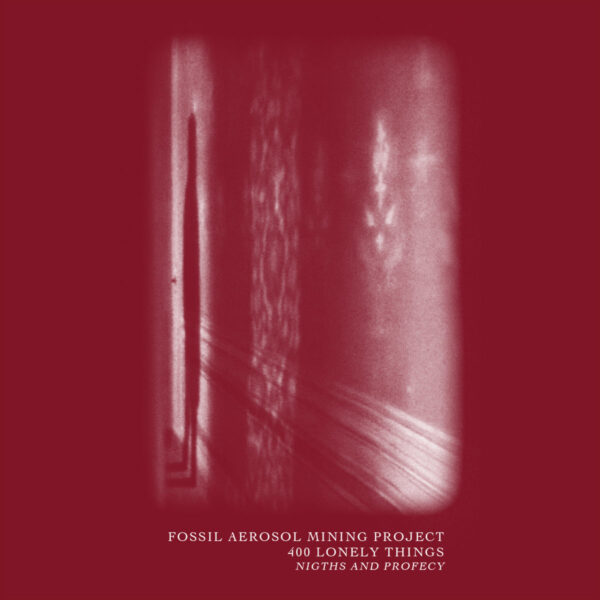 Yes, you all read right, the title of this split release from Fossil Mining Aerosol Project and 400 Lonely Things is deliberately spelled “Nigths and Profecy”, in case the artwork for the cassette isn’t clear enough. Sharing a love of zombie movies, and especially of George Romero’s famous trilogy of zombie movies (namely, “Night of the Living Dead”, “Dawn of the Dead” and “Day of the Dead”) from which both bands have taken samples and loops, and perhaps also processed these, for their own albums, FMAP and 400 Lonely Things celebrate the world of the undead, fake corpses, delayed degeneration, artificial decay, error-filled regeneration and the films including film sequels and even fake film sequels – FMAP made a recording sampling segments of an unauthorised Italian film claiming to be a sequel to “Night of the Living Dead” in 2008 – along with perhaps the ideas and potential concepts and themes that Zombiedom points to, with the result being a rich and complex multi-layered post-industrial world where nearly everything is past its peak or use-by date in some way. Tracks portray snapshots of a world where the delineation between the new and the old, the living and the non-living, and the material and the immaterial is breaking down or growing fuzzy, and entropy is encroaching inexorably however slow and imperceptible it might be. Even truth and reality can no longer be trusted as technologies, in attempting to stave off the inevitable, ends up creating ever more new categories of being in an ever-stretching and ever more fuzzy grey zone between the living and the dead.

400 Lonely Things are a duo (Craig Varian, Jonathan McCall) whose approach to creating darkly ambient lo-fi electronic music with found sound recordings results in a mini-soundtrack style that is actually very clear and which seems less cluttered than FMAP’s work, despite the treated production that makes everything seem a bit mildewy around the edges (and inside the edges as well). The moods on their tracks range from most variations of melancholy and gloom to … most other variations of melancholy and gloom, perhaps with a little more radiant light. The most evocative if creepiest track Varian and McCall offer is “The Secret” with samples of an inhuman voice repeating the track title over and over amid spooky ambient B-grade sci-fi movie effects and the sounds of someone or something trundling over crumbly earth. “Arc Nexus Moon” has a richly resonant sound and an atmosphere of decadence and fading luxury in which an ageing courtesan might be searching for and failing to find the elixir of eternal youth while gasping and stumbling about in the constant looping segments. “Profecy of the Black Spider” comes close to psychedelia ambient and horror movie soundtrack drama in roughly unequal parts. In just five tracks, 400 Lonely Things offer a set of mini-dramas describing a post-industrial / post-apocalyptic world where things are falling apart and humans try but fail to make sense of their new surrounds.

FMAP’s part of the split can be heard as one continuous work of constantly shifting soundscapes, of which melody and rhythm might be two out of many components. Ambience, found sounds, samples of monologues and conversations, background noise and various effects all form an ever-changing soundscape reel out of which drone and melody loops might form for a brief time and then fade back in. By splicing divers sounds in a seemingly random way, FMAP create apparently new sounds and soundscapes that hark back to the past, either real, imagined or idealised. Memories that in fact might have the flimsiest connection to what actually happened turn up. In such a context, fake sequels to the original George Romero zombie film “Night of the Living Dead” might claim to have as much justification as real sequels to carry the mantle of the original film and its themes. What difference exists between fake corpses and real corpses when they evoke the same reactions of horror and fear when people encounter them?

Each band offers something quite different yet complementary on the topic of zombies and zombie movies and their sequels, with the result that this split ends up ranging far and wide on notions of authenticity and artificiality. The soundscapes are very rich and full of strange wonder.