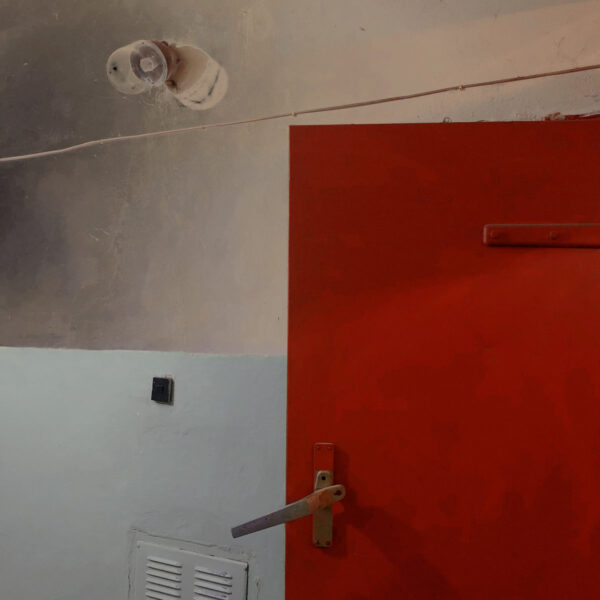 Tremendous record of violin and vocal performances by Tijana Stankovic on her Freezer (LOM LOM 17) album. This was recorded in the borough of Petrzalka and sent to us from Bratislava by the label owner Jonáš Gruska.

She did it inside a freezer, specifically the freezer in the LOM space (which turns out to be a cultural arts centre in Bratislava). She not only wanted a space with a nice natural echo, but also wanted to add some metaphorical depth to her performance. Here. surrounded by cuts of meat, she was able to meditate on the themes of “cruelty and hope”, which is a good way to to address matters if you subscribe to the view that the human race is pretty much a load of cattle on the way to the slaughterhouse. To take a less extreme view, she also wanted a space encouraging a certain interiority, “where thoughts and feelings wait to be addressed”. So far, this seems to have worked really well – a lot of raw emotions and pain are being bared on the record, and we’re only up to track 2 ‘A Fallen Star’. I feel I can trust an artist who starts out the project based on this very honest and emotive approach to music generation, rather than proceeding from intellectual ideas or from notions of “extended technique”. Instead Tijana Stankovic wades right in expecting to exorcise some very personal demons in this cold meaty zone. Soon you too will feel as isolated as she does, yet you’re with her every step of the way down these concrete paving slabs towards the mortuary, wishing that she makes good on this harrowing quest.

Speaking of harrowing…along with the agonising violin scrapes, which raise the hackles and tighten a fellow’s spine to near-breaking point, we also have her equally plaintive vocal tones, which rub the heart until it’s full sore. She may be singing in her own language, or just making wordless sounds (on the last track ‘Salty Words’, it’s certainly the latter); the process that’s relevant is her connection to her own country’s folk music culture, which partially comes from her ethnomusicology studies – she knows a lot about Balkan culture. Unlike some purists in the folk music area, Tijana Stankovic doesn’t appear to be concerned with replicating the past in an authentic manner, so much as pulling the spirits from the past into the context of present engagement…to put it another way, here are some Slovakian spectres and corpses that’ll get up and dance as soon as she opens her mouth and puts bow to violin. In this respect, I’m somewhat reminded of the great record by Sarah-Jane Summers we heard in 2019, which seemed to draw on Scots folk traditions now and again. If we are considering the problem of how to keep folk music viable in the 21st century, Stankovi? is clear on this point herself, and once again invokes her meat-locker metaphor: “To freeze…is to preserve.”

A very affecting and honest recording, which hits home in the most direct way imaginable. Nightmarish cover photo of that foreboding meat-locker door was made by Jonáš Gruska, who also did the recording, and Lucia Koval’ova. Five stars for this excellent release. From 11th February 2020.

6th August 2020 update: Jonas writes to inform me “there is no meat left in LOM anymore. So there were no dead animals present in the freezer during the recording.”