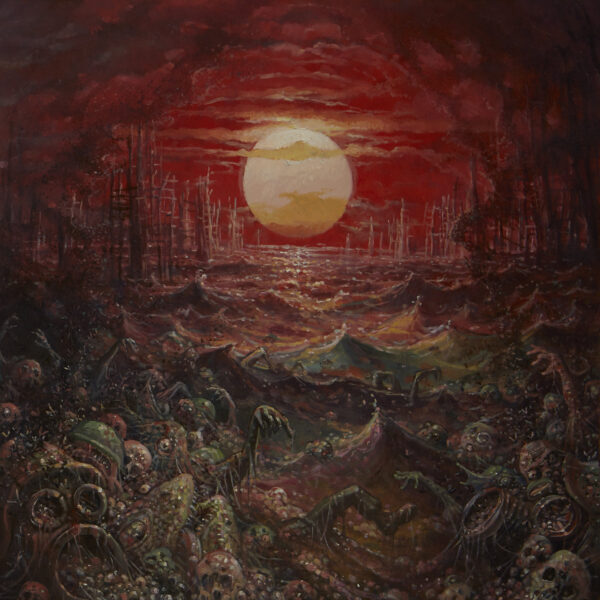 Punishing record of high-energy “grindcore” noise from Vomit Fist…this Omnicide (JVTLANDT JVT0019) EP delivers just over 15 mins of fast-moving toxic sludge that could give you incurable cancer just by picking up the digipak, and extrapolates its nihilistic pledge into the apocalyptic cover art, where war machines and diseased corpses are piled up in a huge red ocean of blood.

This New York group turns out to be led by guitarist Nick Didkovsky, a fellow we more normally associate with free improvisation and art music modes, on account of his recordings and performances with Han-Earl Park, Hugh Hopper and Fred Frith, but this would be to ignore his avant-rock noise combo Doctor Nerve (who I never heard). Renaming himself Vürdoth for this Vomit Fist thing, he roped in his son Leo (Lurkrot) on drums and recruited Malcolm Spraggs Hoyt (calling himself Skrag The Screecher) from the punk band Chaste to add the throat-shredding vocals that are the hallmark of this genre. Two photos of them playing live reveal the requisite black T-shirts and some suitably alarming facepaint daubs to make their faces look like evil demonic skulls. They’ve been doing this metal thing since 2013 with two self-released EPs, of which this second one appears to have now been reissued (or at least distributed) by Jvtlandt.

A good purging spin with plenty of short tracks – ‘Cleanser’ is but 17 seconds long – but my favourite is ‘Choir of the Submerged Church’, which bucks the trend for extreme brevity by coming in at 3:18 and not only boasts some very skilled guitar-chiming noise, but feels more structured, like a prog-rock epic in miniature. The other odd thing is how much “fun” Omnicide generates…despite the pure negation of the lyrics and imagery, the band don’t really seem too keen on projecting an all-out evil vibe, as many of these death-core grinders strain so hard to do. Instead you get the sense the band are really enjoying the whole thing, especially the drummer. I’d like to think Leo is a furious 15-year old teen from the frantic way he’s hammering these tubs, but I’m probably wrong.

With visuals by Paolo Girardi (horrific cover painting, also available as a poster) and Masato Okano (grim devil illustration inside) and mastering by Thomas Dimuzio (another art music connection there). From 13th February 2020.