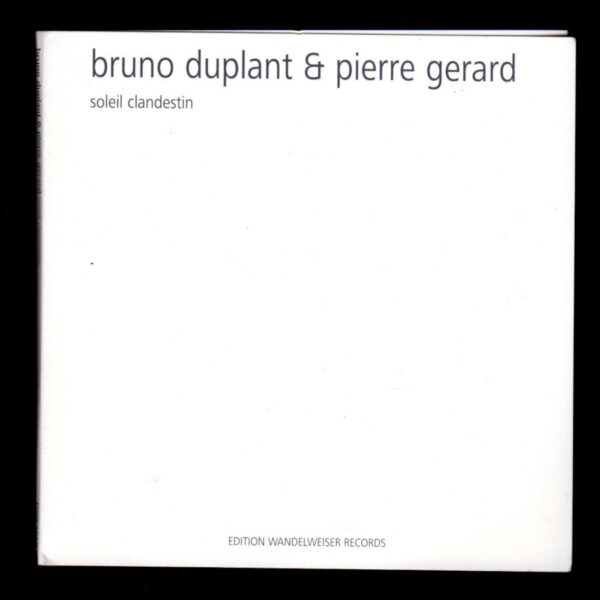 Got the latest record from Bruno Duplant, where this taciturn guitarist and composer is teaming up with Pierre Gerard for a set of duets, and the whole thing Soleil Clandestin (EWR 1912) has been released on Edition Wandelweiser.

Bruno and Pierre last appeared together on a very challenging record called Etudes for the minimalist Rhizome.s label, but that was a split – they didn’t actually brush their antlers together in the conservatory. In keeping with the “blanked out” philosophy that seems to inspire both these fellows, all the pieces are called ‘Untitled’, presumably making the usual attempt to deny the audience any form of pre-conceived ideas, and trying to clear a space for the music to be itself. The credit roster is also enigmatic, with its reference to “abstract voice”, but the material is mostly realised with guitars, electronics, percussion, and field recordings.

In spite of all their effort to go ultra-minimal, this Soleil Clandestin thing actually delivers quite a rich ladleful of broth, and while it’s not exactly an action-packed marathon through an electronica expressway, the small considered notes and their very deliberate positioning in the all-white fabric makes for something resembling an entertaining spin. There’s still the same “drip-feed” method – also called the water torture approach – which is a technique I associate with Gerard, and his ‘L’innocence a la verticale (sur la falaise)’ was remorseless in applying it. I mean that musical information arrives on our plates in small, microscopic fragments, leaving us to do our best with a small spoon and a telescope as we try to ingest this extreme variation on nouvelle cuisine. Ah, but what tastes they be.

If I can likewise characterise the work of good old Duplant, the word I normally fish out of the brain bag is “disconnected”; the narrative is shattered, the isolated statements make no sense, and it’s not even clear if there is a narrator yapping out these enigmatic blips. A fair number of hurdles, then, for the intrepid musical explorer to negotiate, but the fish-fry is well worth the hoopla. Grab at whatever you can on this skeletal dinner table, not knowing whether that’s an anaemic celery stick or a breadstick ye crunch. All the dinnerware is made of glass, by the way, thus adding to the transparency of method. A real winner – I can’t think of a more enjoyable way to spend the time than to have your hide flayed in slow motion by these benevolent blows of the whip.

I may have been haughty about the Wandelweiser ethos in past considerations, and still have considerable reservations about it, but I’m always ready to admit a good dose of Duplant’s icy blade into my neck. From 19th February 2020.