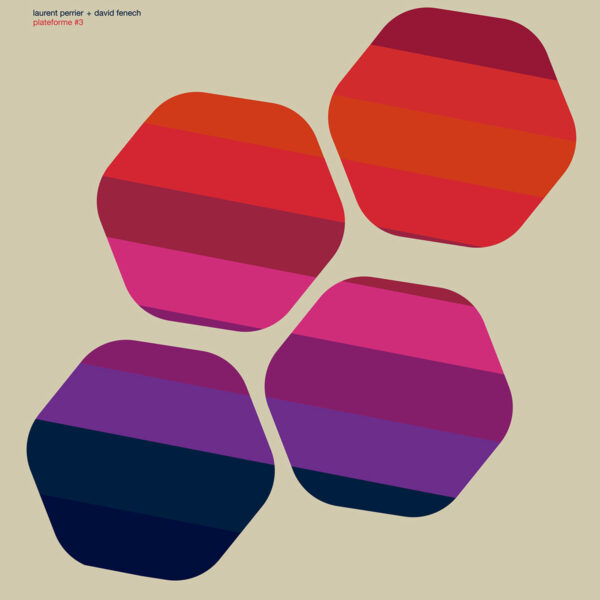 French musician Laurent Perrier used to release a lot of material for his own Sound On Probation label some years ago, often appearing under any guise other than his own name – Cape Fear, Heal, Zonk’t and Pylône. More recently he’s been developing this nifty line in collaborations with others, some of them quite significant players, in the occasional “Plateforme” series. We enjoyed the previous outing where he did it with Tom Recchion, Christian Zanesi, and Francisco López, and I’m quite surprised to find that was nearly four years ago. Today he’s managed to hook up with David Fenech, the French composer and guitarist whose Grand Huit record from 2000 was reissued by Gagarin Records, to great acclaim (from me anyway).

I suspect Fenench is something of a hidden treasure; he has great skills which he conceals under a mask of spontaneity and eccentric imagery, all of which are good things. On Plateforme #3 (BAM BALAM RECORDS BBLP069), it seems that Fenech and Perrier didn’t actually shake hands over a piece of brioche, but Perrier received sound samples from Fenech in the mail, along with his usual deliveries of fine bacon from Brittany. In this instance, Perrier’s task is to rework the material into a new piece of electronic music. Two side-long myrmallons result, the two geniuses taking turns to act as producer. On the A-side, a fine piece of guitar-rock trundling minimalism composed and played by Fenech gives way to some contemplative synth mind-puzzles emerging from the Buchla and Serge synth set-ups of Perrier. It might be reasonable to read this 18 minute cartwheel down the corridors of philosophy as a minimalist post-modern take on Heldon and Richard Pinhas; digging the sounds and the playing on this one, but as a composition it feels like we’re not really taken anywhere by the existential journey.

For those who welcome doubts and uncertainties into their Cartesian brain-pan, the B-side might be more suitable fodder for the cortex. Perrier composed and mixed this lengthy isolatory outer-space dripping terror using his Eurorack modular synth array, while Fenech strapped on his gravity boots and picked up a prepared electric guitar. This side goes a lot further down the studio processing route, to the extent that everything soon sounds very alien and unfamiliar, while the pulses and repetitions do a lot to inject tension and tremors of fear. Kiki Pey did the cover artworks, sitting somewhere between 1960s fabric design and a pavilion for a futuristic World’s Fair. From 17th February 2020.

Montreal musician Roger Tellier-Craig might be familiar to some listeners for his post-rock escapades in the 1990s. He was briefly a member of Godspeed You Black Emperor, until he left to found his own Fly Pan-Am project, and also appeared in the Godspeed spin-off collective, Set Fire To Flames. There’s also Et Sans, mostly a duo with Alexandre St-Onge. Some of these are represented on releases from Alien8 Recordings. More recently, Tellier-Craig has turned his hand to the craft of experimental electro-acoustic composition, for instance on the LP Instantanés released by Root Strata in 2017. Today. we have a CD with a near-white cover with simple typography, and bearing the title Études (SECOND EDITIONS 008) as an earnest of its composerly intentions. He’s been studying, we are informed, at the Conservatoire de Musique de Montreal which is where he realised the four pieces between 2017 and 2019. Two of the pieces won awards, and he’s got a certificate in composition from the Conservatoire. To hear him talk about his process, he’d like us to know it’s rife with tensions and contradictions – he wants to compose and to deconstruct, he wants to organise but he also likes to interrupt the flow, and he wants to emphasise “relationships between differing sonic phenomena.” Good aspirations, but I find the music completely fails to live up to these ambitions; it’s flat, sterile, and boring. In vain one searches for substance, tension, meaning, or even some interesting sounds in these Études. An empty, vain exercise it be. From 19th February 2020.

The prolific and collaborative Werner Dafeldecker is here with his solo record Parallel Darks (ROOM 40 RM447), two sides of electro-acoustic music on vinyl. I think we last heard from this Austrian fellow when he went to the Antarctic Peninsula with Lawrence English, and they made the portentously-titled but very good Shadow of the Monolith record in 2014. Apparently this may be Dafeldecker first foray into “true” electro-acoustic composition; at any rate it’s valid to perceive it as the culmination of 30 years of musical practice, which I suppose includes his improvisational work in Polwechsel.

I’d like to know more about the detail of process, of assembly, but we never really get told these things; Parallel Darks may involve field recordings, analogue synths, even some musical instrument playing, but everything is manipulated in the editing and sound-processing work that results in this delicious, vibrant, buzzing, semi-musical blur. Listen deeply into this blur and there are many layers at work, each somehow complementing each other with sounds bouncing from one surface to another. It is very subtle – no strong contrasts, loud noises, or jolting shocks from this composer – but Dafeldecker quietly and expertly manages his forces and elements with the combined skills of chess player, abstract painter, and computer programmer. At best, we are presented with the rich array of a multi-projected screen in which we can see aspects of “real life” fragments spinning alongside purely musical forms, interacting on a microscopic level where molecules and atomic particles lock together about as well as pieces of a jigsaw.

There’s also some vague plan to keep a lot of this hidden from direct sight; Dafeldecker expresses an interest in operating at the periphery of perception, so parts of Parallel Darks may be rather menacing in nature, glimpses of something we don’t want to see, while we’re placed more or less in a “haunted zone” where we’d rather not stay. This impression is both nebulous and subjective, but so is the record; a very porous, gaseous blanket of sound. From 17th February 2020.