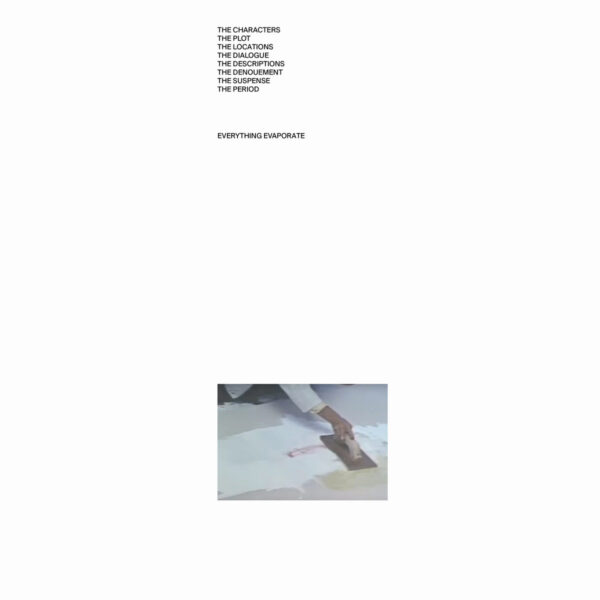 Félicia Atkinson is a French-born, Belgian-based musician with a considerable discography both as a solo performer and in collaboration with other musicians under her own name and, from 2011 to 2014 or 2015, under the cute moniker Je Suis Le Petit Chevalier 1. Her most recent recording “Everything Evaporate” – she seems to put out at least one album or EP every year or every couple of years – is a beautifully resonant and minimal work, beguiling with its various languid voices and drones, yet surprisingly fast-moving and busy even with the snail-like pace of most tracks. On this album, Atkinson works with gongs, bells, marimbas, a piano and her own voice – or voices perhaps, since there are pitch-shifted spoken-word recordings and auto-tuned singing samples appearing as well. “Everything Evaporate” was recorded after a period of touring and performing, during which time Atkinson was also pregnant, and the album draws on recordings of her performances and studio improvisations that break up these performances, and reflects also something of what happens when a period of perhaps frenetic activity and movement suddenly ceases, as when touring and travelling stop so Atkinson could have her baby, and the next thing that happens, the whole world goes into COVID-19 lock-down, forcing Atkinson among others perhaps to assess her life, where she has been and was coming from, where she is now, and where she might go to next.

Dedicated to abstract expressionist painter Helen Frankenthaler, the album explores the spaces between sounds, which might be taken to represent the world when obsessed by material things and activity, and finds those spaces themselves aren’t necessarily empty of activity or things … they just aren’t the objects or movements on the material plane of existence. Memories, observations, mindfulness, being in the present, feelings and hopes about the future … all might crowd into the spaces opened up by the tones, drones and other sounds and their after-wash. After some time, boundaries both physical and non-physical – including those boundaries deriving from our cultural upbringing, such as the boundaries dividing the past, the present and the future, notions of time, and even the boundary between consciousness and other states of awareness – dissolve and listeners may find themselves in a state between being awake and being asleep, where unconscious thoughts and feelings merge with the conscious.

Each track seems amazingly deep yet listeners can have the sensation of floating serenely while totally immersed in invisible ether and marvelling at the sounds and sensations that buoy them up. Track titles, in the order that they come, trace a linear narrative from dissolution to a realisation and transformation, leading to some kind of resolution that might result in a new adventure or a reiteration of what went before.

Paradoxically after all I’ve said already, the album does demand close listening and concentration, even as it entices the listener to fall into a state where dreams and the unconscious take over. That may be the one thing that detracts from “Everything Evaporates” yet if you don’t pay attention to its layers, its introspection and the self-contained universe that exists within, you will miss so much that makes this album a remarkable sonic experience. Each track is at once its own universe and yet part of the same universe; the final track “This is the gate” in addition promises to lead listeners to something beyond even that meta-universe … or back where we started …