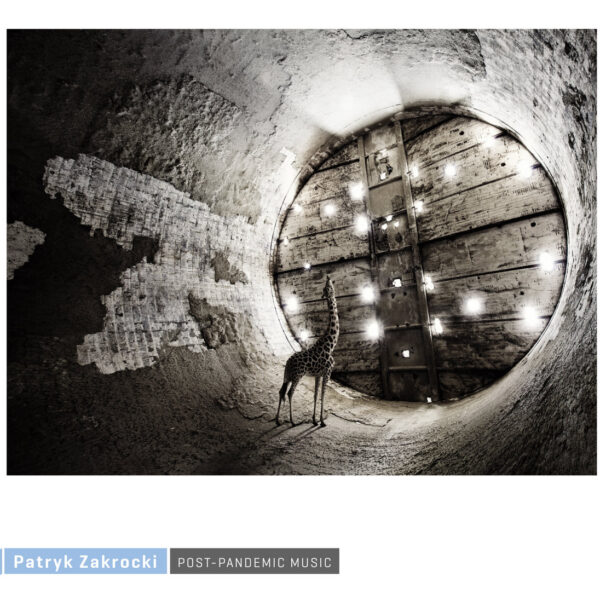 Checking his biography at his website, I see Patryk Zakrocki is a busy and quite prolific composer and sound artist, having worked in theatre and the cinema as a composer of soundtracks, and conducting or playing music as a solo artist and in collaborations, teams and orchestras. He explains his philosophy of music and his approach to composing and, most of all, listening to music as a basis for composing and playing music at his website as well. His most recent release “Post-Pandemic Music” might be intended to serve as a warning to humanity to listen to its own inner voices and the voices of the natural world as a guide and path to coming out of the current global COVID-19 hysteria which among other things may be subject to manipulation by powerful individuals, corporations, governments and other elite groups to wrest even more control of the planet’s natural resources for their own greed.

Zakrocki’s approach to composing and playing electroacoustic music results in a highly atmospheric and individual yet quite minimal style of music that for the most part seems gentle and light and even quite playful. It can be very slow but this is consistent with his belief that sound relies on time for their very existence and so listeners must be prepared to invest their time to savour sound and particular sounds in full. By calling this “post-pandemic music”, Zakrocki might be suggesting that listeners should take stock of their current circumstances and ask themselves if they are or are not in tune with nature and their own inner being, their purpose for living. Only then might we find answers or solutions to the issues and problems our world faces and be able to wrest control of our lives back from those powerful elites manipulating us.

Listeners can however find joy on the short track “Hint of a Human” which is very light and impish in attitude. The type-writer sounds might seem outdated but they have a crisp, fresh sound along with the sprightly space-tone melodies. Longer tracks feature more atmospheric music of sometimes darker, gloomier nature where the sounds of urban living and industry mingle with violin and other acoustic instruments, oscillators, electric thumb piano and other samples and field recordings. “A Bit Less Than That” seems to be a soundtrack for a short film of a factory located on a space station orbiting Earth that might be slowly breaking down and losing machines, equipment and even robot workers into the vacuum of space. Last track “Le Corbusier’s Shower” features Olga Myslowska delivering spoken-voice messages and quotations from Swiss-French architect / designer Le Corbusier’s writing in different European languages against a background of oscillating chords played on a xylophone, later changing to a glockenspiel. One would think this is the most important track on the album for its length, its position as the closing work and its inclusion of spoken messages but over 19 minutes the music does become tedious. Not all listeners may care much for Le Corbusier’s work either, given that much of his architecture was insensitive to the culture and needs of communities in the areas where his buildings were located, his ideas on social organisation could be frankly techno-fascist and he was known to have had links to fascist groups from the 1920s to the 1940s. Knowing this, listeners might find the quotations peppering this track hard to take seriously or hard to tolerate at all.

While I did like “Hint of a Human” and “A Bit Less Than That”, and “Ocean Tide” is very atmospheric, I must admit not caring for the fussiness of “Le Corbusier’s Shower” and those quotations soured on me once I did my research and found a few uncomfortable facts about the famous architect. This is one album I am passing on and not recommending to listeners.