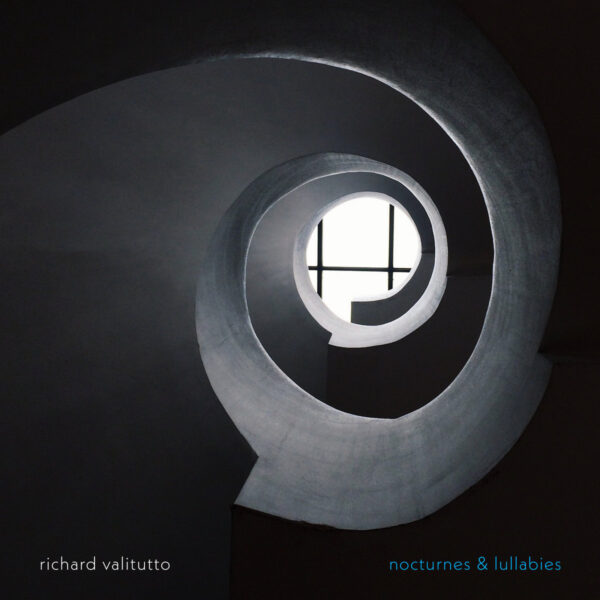 Most of these New Focus Recordings releases of contemporary classical music are one or two shades too highbrow for me, but I’m finding some points of access with Nocturnes & Lullabies (FCR243) by the pianist Richard Valitutto. Perhaps it’s the vaguely dark themes he explores with his Steinway across these eight tracks that appeal to my inner Goya. The keywords emerging from the press release are “themes of the night…sleep, life, death and consciousness / unconsciousness”, and that’s already whetted my grindstone. He could have made it a bit more surreal and symbolic for my tastes, but I’m always ready to drop everything for a good bout of night-themed and sleep-related music.

A number of contemporary composers are represented here, and they all contribute modern interpretations of this most respectable of classical forms, the Nocturne. The pieces that stood out for me the most are by Marc Sabat, Nicholas Deyoe, Philip Cashian and Wolfgang von Schweinitz, but taken as a whole the CD works very well as a “programme” in the old fashioned sense, and Richard Valitutto sustains a sombre, chilling mood throughout, playing in a suitably subdued manner with occasional flashes of excitement provided by his knowing, pre-scored dissonances. Marc Sabat is the Canadian composer whose cerebral 2014 piece Les Duresses failed to make any emotional connection with reviewer Ian Sherred, but today I’m finding his 7:04 ‘Nocturne’ a coherent and pleasing pattern of a small number of notes, with simple slow intersecting rhythms passing back and forth much like ripples in a pool of goldfish.

Also enjoyed the controlled intricacies of Philip Cashian’s ‘Nocturne’ although the notes indicate, slightly sniffily, that it’s a “youthful work” and shows too many influences from his teacher, Oliver Knussen. I really wouldn’t know. Nicholas Deyoe gets two pieces on the CD, thus occupying 28 minutes of the total time, but his ‘NCTRN’ is quite the subdued belter, delivering its stern messages inside an elaborate, post-modern framework; part of his agenda, which he shares with the pianist, is an interest in subverting contemporary classical forms. Again, I wouldn’t be able to point to a single bar that’s an example of this plan, but I do like a fellow who thinks outside the box. I see we heard from Richard Valitutto before as a member of Saturn’s Rival, who made a record for PFMentum around 2015. The attempts of this group – most of whose members are composers and musicologists – to play free jazz fell a bit flat with me, but this tiny darkster of a record indicates where Valitutto’s real strengths lie.

The cover art is by Len D.C., and hints at psychological neurosis in a fairly effective manner. It’s like a melange of visual tropes lifted Hitchcock’s Vertigo and Spellbound movies. From 25th February 2020.