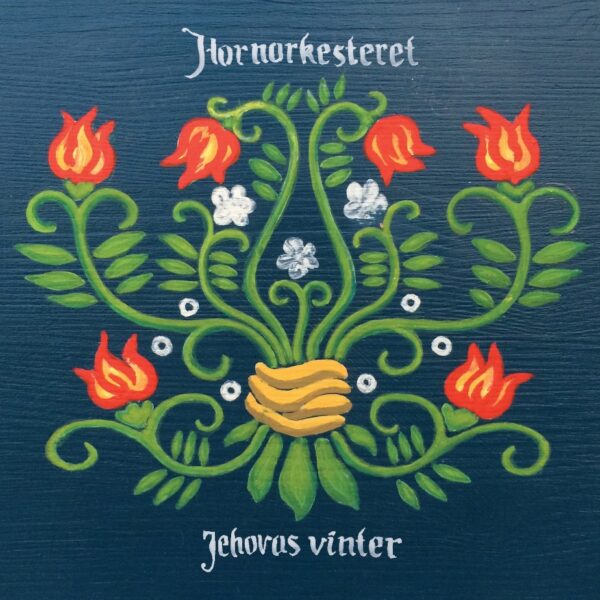 From Norway, we have the six-piece of players who call themselves Hornorkesteret with their LP Jehovas Vinter (PANOT LP 003). These fellows, led and produced by Jonas Qvale, produce their unique brand of acoustic music using home-made instruments created from the antlers of reindeer, The antlers are strung in various ways and played with bows, just like conventional violins and cellos, while their drummer advances the strange music with his minimal percussion kit, including timpani and toms. He also plays the stumps of old trees.

Right away with this record I feel plunged into a world of old pagan rituals and forgotten folk lore, or invented lore…the folk-art cover of gaily-painted flowers is like something you’d see on the side of a gypsy caravan or canal boat, and the insistence on animal and tree matter as the basis for their instrumentation could easily be linked to ancient European woodland mythology, of which Scandinavia has its fair share. It’s also tempting to regard Hornorkesteret as a “gimmick” group, but that would be a mistake – their music has an allure and indeed a disquieting power, and they’ve been doing it for over ten years now. Jehovas Vinter so happens to be their first LP made in a recording studio, but their anthology set Fjær og jern from 2011 is reckoned to be a good starting point for the curious listener, as it represents aspects of their music from 1999 onwards. There’s also the odd cassette release The Marhaug And Bøe Expeditions from 2001, where the combo joined forces with two of Norway’s finest, the prolific Lasse Marhaug and the mysterious Tore Honoré Bøe.

On today’s spin, I found Jehovas Vinter both unsettling and eccentric…once you get used to the very odd sound they make, you find they don’t settle for an endless improvised droning barrage (as might have been expected), but instead play primitive tunes, in the hopes of evoking folk forms, and inviting us to dance. One tune refers to a shaman, and the press notes can’t help adding layers of “ancient” associations to certain tunes, describing one as “a polonaise from the stone age” and another as “a trip into prehistoric times”. Animal and forest folklore aside, the players exhibit considerable invention and skill in wielding their instruments, there’s much minimal syncopation and strange awkward gaps in the rhythms (they would easily wrong-foot any prospective dance troupe), and the tunes they devise have a stark, spare ingenuity. Besides the tunes (composed by Qvale and the band), the players make abstract sounds and do their best to invoke the spirit of nature – animal cries, and the wind. Only a small amount of studio echo or reverb is called on to boost up the resonant twanging, sawing and plucking sounds; the rest of it is in the hands and craft of these gifted players.

I’m sure they’re all lovely people too, although the back cover photo makes them look slightly scary, possibly because of the enormous antler drawing which has been pasted in to the photo and made to look as though it casts a shadow on the ceiling, dwarfing the humans as it towers over them and calls forth a strange rough magic we don’t know much about. Proud of belonging to this unique combo, some of the players also sport matching T-shirts with the band name and logo. Apparently Darkthrone and Current 93 are fans, neither of which surprises me for some reason. I believe Current 93 were notorious for their use of the thighbone trumpet from Tibet on some records, but I wouldn’t know. In any case I sense that Hornorkesteret are not just about the skulls and the bones, and have succeeded in carving out their own unique brand of odd music. From 27th January 2020.