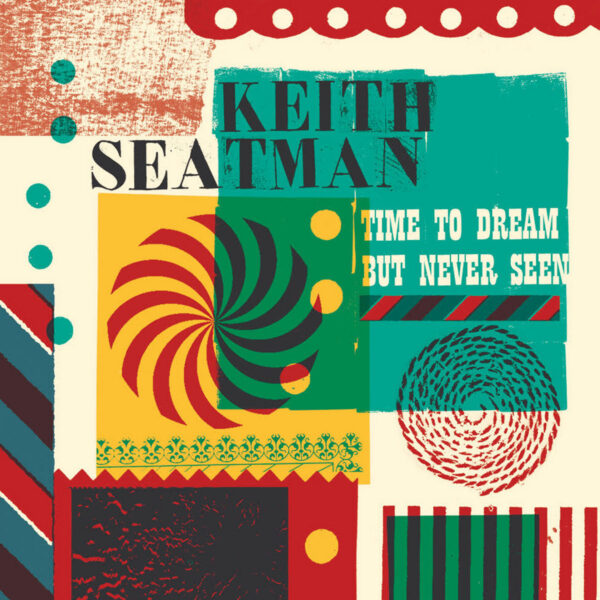 Last heard from English creator Keith Seatman with his solo record All Hold Hands and Off We Go, released on K.S. Audio in 2017, and we’ve also noted his contributions to the series of compilations released by A Year In The Country, where he rubbed shoulders with like-minded musicians. I say like-minded, as I tend to associate Seatman with this loose affiliation of very English musicians who have an interest in 1970s and 1980s nostalgia, reflected in incidental music for television and a passing interest in English folk music. When we receive releases from such, stapled on the side there’s an imaginary shopping list of cultural goodies that starts and ends with the Radiophonic Workshop, Nigel Kneale, and Doctor Who.

All of these are present and correct on Seatman’s new LP Time To Dream But Never Seen (CASTLES IN SPACE C1S042), along with a sleeve note written by Jim Jupp of Belbury Poly and Ghostbox. I tend to regard the Ghostbox project, nebulous as it may be, as the progenitor of this particular strain of endeavour, as well as using their records as benchmarks for the even more nebulous “hauntology” thing. Today’s record stakes claims in all of the above territories, but lest I sound too hyper-critical, I’ll say that Time To Dream is a very entertaining set of tunes, the composition and layering technique of Seatman has much to admire, and he’s structured the record as a two-sided event that plays very well. As to that technique, I sense that it’s quite labour intensive; there are synths, there are samples, but it’s never clear where Seatman’s keyboard playing leaves off and where the nostalgic found-objects (if indeed there are any) begin.

As ever, I’m reminded of the process behind the Hipgnosis cover art for Led Zeppelin’s Presence (which to me, is the talisman that explains everything). The visual artists wanted to evoke an innocent age of wholesome middle America from some vague time around the 1950s; what interests me is that they did it by staging new photos for the front and back covers, but used images clipped directly from old magazines for the inside gatefold. The joins were seamless; Hipgnosis did a great job of recreating the past, with actors, stage sets, and process. I say this because this is how I interpret the phrase “sounds, melodies and technologies plundered from different time zones” – Jupp’s assessment of Seatman’s achievement. To put it another way, it’s not enough to simply wonder out loud about incidental TV music of the 1980s; you have to evoke it. Seatman is getting better and better at throwing himself into this task. Accordingly, Time To Dream But Never Seen creates a whole stream of impressions in the listener’s mind, allowing us to briefly dream of a golden era of lost childhood, while at the same time slightly undermining it and revealing a darker side to the whole fantasy. Specifically, it seems to me that trips to the seaside, country walks, and Enid Blyton stories are all targets for Seatman’s wander down the hall of mirrors in his imaginary audio funfair. Along with the time-travel aspects implied in Jupp’s scenario, the listener is always troubled by a sense of things going every so slightly askew in these impressionistic anecdotes. It’s a subtle balance, and not easy to pull it off.

We could also highlight the “weird folk” aspect which is represented by at least two tracks on the album; one of these is ‘Waiting By The Window’, a spookster with a wayward synth melody which Jupp compares to a “folk-horror inspired episode of Doctor Who”; the other one is ‘Speak Your Piece’, where the pastoral elements mostly come from the recit of Douglas E. Powell, who also appeared on All Hold Hands. As the narrator on this cut, he alludes darkly to “the old ways” with all the assurance of a rustic H.P. Lovecraft character, and this track effectively summons the requisite aura of mystery surrounding unknown animal rites and vegetative magick in a few deft strokes. For those who wish more of this, I see they made a 10-inch record in 2018 called Broken Folk, which should be just the ticket for all you badger-mask antler-wearing types.

The sumptuous presentation of today’s LP is the icing on the cake; the artwork was created by Spectral Studio, and evokes a faded memory of circus posters with its typography and canal-barge painting with its colour scheme, and likewise has resonances with the printing methods used on old Picture Puffin children’s books of the 1950s. The LP enjoyed a limited run pressed in brightly-coloured vinyl. The label, Castles In Space, has also put out records by Drew Mulholland and The Central Office Of Information. This, from 15th January 2020.