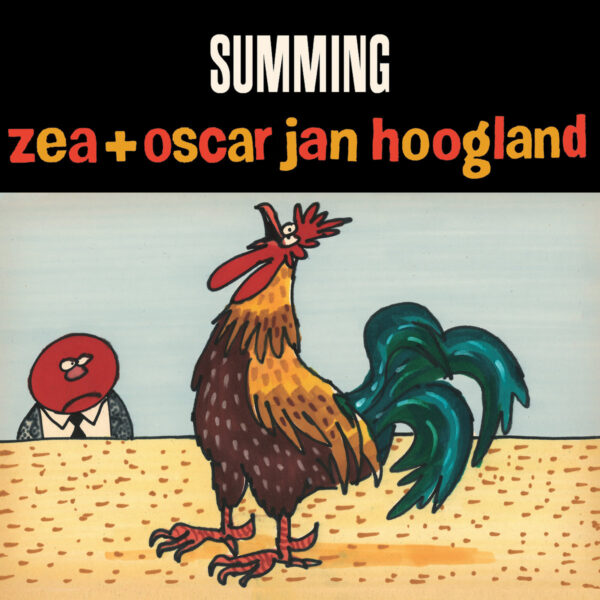 Summing (MAKKUM RECORDS MR29 / PALTENBAKKERIJ PB11 / KLANGGALERIE gg327) is a team-up between a couple of Holland’s most infamous mavericks, Zea and Oscar Jan Hoogland. Working in their uninhibited, free-spirited manner they succeed in delivering themselves of nine song-like pieces, using guitar, vocals and electronic keyboards, touching on styles such as DIY, punk rock, post punk and shoegaze, but also doing offbeat melodic stuff (at least one cut here reminds me of Slapp Happy and the keyboards of Anthony Moore) and emerge with something uniquely their own. They have an endearing “thrown-together” spontaneity at work, creating the impression each song was invented almost on the spur of the moment, but it’s very likely there are deep musical and lyrical skills and experience behind every throwaway beat, bar, and rap.

Zea is Arnold de Boer, lead singer and guitarist in The Ex, one of Holland’s most famed exports in the lively stompy African-influenced punky rock stakes, and we’ve heard him a couple of times now with his 2014 LP The Swimming City (“ten quirky and restless songs”) and the rather odd Moarn Gean Ik Dea from 2017, which was sung entirely in the Frisian language. Oscar, meanwhile, is equally notorious around Amsterdam as a topnotch jazz player – he plays in the Duke Ellington cover band All Ellington, for instance – but also a musician with a lineage leading back to Misha Mengelberg, who was his tutor. Mengelberg, I’ll have you know, played with Dolphy and also got drawn into the Company improv scene in the UK presumably through the ICP connection. Oscar Jan Hoogland is also one of these enterprising “get things done” types who is a go-to dynamo when it comes to organising concerts, festivals and theatre events.

This isn’t the first time Zea and Jan Hoogland have worked together – they both appeared on that LP The Swimming City, and made the Exploding Head Syndrome / Electric Clavichord single for Makkum in 2014. The other area of overlap is that de Boer happens to have been Arnold’s sociology teacher at school when the jazzer was still a teenager. Hard, if not impossible, to characterise this enjoyable and unusual release; I will mention the lyrics are sung in English, so the Frisian thing that de Boer likes to promulgate is not a barrier this time, and his voice sounds slightly pained, angry, yet also strangely hollow no matter what emotional state he attempts to project. His guitar work is incredibly inventive, slashing out tremendous riffs and patterns and somehow managing to land either side of the beat (when there is one). The lyrics are dense and allusive, full of odd riddles for modern times – one favourite is ‘We Lost Our Phone”, with a lyric that includes the incongruous image of “grown up men…learning NATO alphabet”. Oscar Jan Hoogland’s keyboard work is also a hot-spot for many gobbets of quirkoid delight. One of his specialities has been to devise his own electric clavichord, which he did by running it on the “wrong” voltage and thus adding a layer of freaky distortion that would raise Sun Ra’s golden turban an inch or two. If you were expecting laid-back cocktail jazz from this Hoogland, you’ll be in for multiple pleasant surprises as he coaxes nine types of muzzy freakoid balminess from his synth and keyboard array.

Cartoon cover art, by the cartoonist Rene Windig, may lead you to expect a degree of “wackiness” from this record or even to dismiss it as a joke, but you’d be wrong to miss out on this gemacious globber. Available as CD, LP and download. From 12th February 2020.