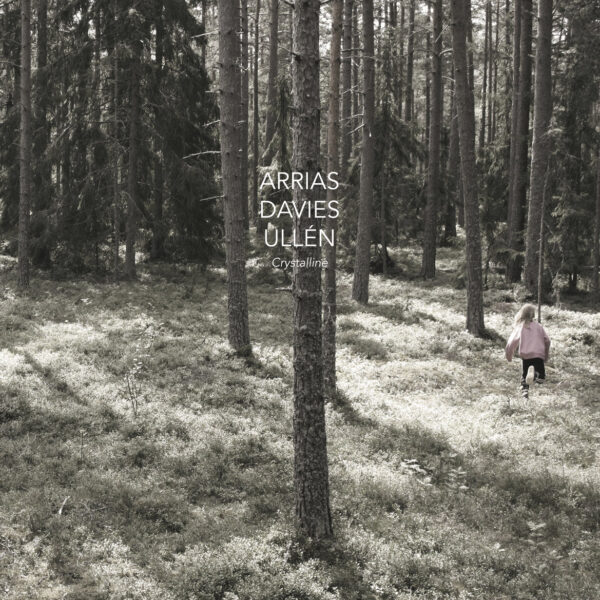 Excellent record Crystalline (AUSCULTO FONOGRAM AUF005) created by the trio of Arrias-Davies-Ullén. It would probably be unhelpful to work too hard to categorise this lovely music, except I will note it covers ground in both the areas of composition and improvisation – bridging gaps in ways which many contemporary players hope to do. More about this “crossover” in due course.

The players are Angharad Davies, the Welsh violinist who can pretty much do no wrong in our book; we last heard her, I think, on the Fancies record for Another Timbre, a label where she features quite frequently, with Tisha Mukarji. She is the visiting guest player who was invited by the two Stockholm players, Johan Arrias and Lisa Ullén, as part of an “international cultural exchange” in 2014 and 2017. Johan Arrias we heard recently on his Pour Alto Seul record, made for this same label; I was disappointed by what I perceived as an overly sentimental side to his music. I also forgot to mention we heard him before on the little-known Spectropol label, when he made Bromma with Japanese major player Tetuzi Akiyama. Lisa Ullén, the academy-trained pianist and composer, is entirely new to me, although I see she did record with Cyril Bondi and d’incise some years ago; I’m intrigued by her recent Piano Works release for Disorder (her own label), a three-disc set of her solo piano performances.

When this trio first shared the sweet ambrosia of musical interaction, they did it as a live concert in London at Cafe Oto, but in 2017 they met up in Sweden at an art school and made a conscious effort to make use of their extensive musical knowledge, experience and backgrounds; they all share an interest in modernist composition, long-form improvisation, and free jazz, and found this such a productive line of enquiry that it has shaped the sessions we now hear on this 2018 Crystalline set, which was recorded at Atlantis Recording Studio in Stockholm. In fine, all musicians contributed one composition each, and then the record concludes with two short improvisations. Of these, the two compositions by the women of the group are outright successes in my book. Ullén’s ‘Undercurrent’ is 10:36 of beautiful, cryptical understatement, with a vaguely sombre tone lurking in the background; technically, it works the hardest to make the most of the three instrumental timbres, that is piano, violin and woodwinds (all of them with added preparations); it leaves plenty of tense unexplained space hanging between notes, to great effect; and it uses delicately repeated patterns to hang together a series of gnomic utterances, almost amounting to a long riddle in sound. Just great!

Angharad Davies composed ‘Rydal Mount’, a short hymn of praise to that part of the Lake District made famous by William Wordsworth; skeletal, taut juddering string action is pitched against minimal high-register piano notes and short, agonised squeals from the woodwind section; likewise making bold use of space and silence. One wishes more modern composers could be this elliptical, this elegant; the piece says more in six minutes than many symphonies three times its length. Less won over, me, by the two parts of ‘Rituals’ by Johan Arrias; his own instruments are too upfront, there are too many spaces filled, and it seems too anxious to make a statement, but at least it’s less emotionally overwrought than his solo record. This leaves us with two all-out improvisation pieces, ‘Etude’ and ‘Coda’, credited to all three players; the aim here was about setting the context and exploring the “group sound”, so we hear quite a few exciting effects and playing modes (without feeling obliged to admire their “extended techniques”).

I like the way the cogs of the three-part machine mesh together in unexpected places here, though I still express a preference for the composed pieces which are somehow more focused and satisfying. Even so, this is a record anyone would be proud of. Maybe deserves better cover art than this rather generic girl-in-the-forest sleeve. From 12th February 2020.