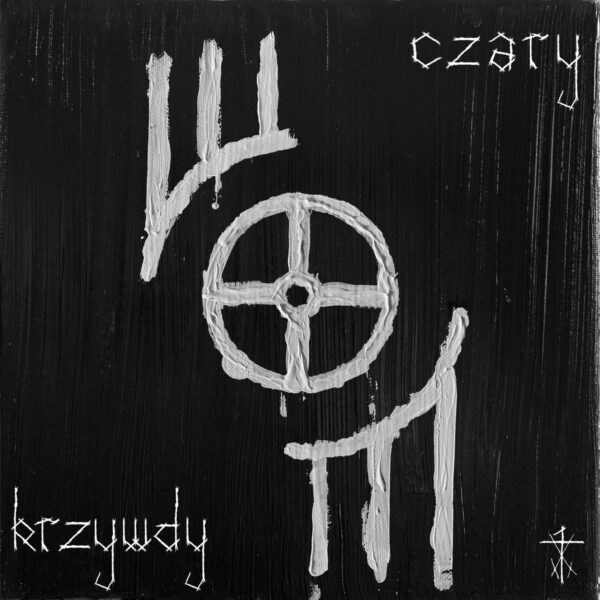 A drone ambient project of Warsaw-based musician Mateusz Szymanski whose day job normally involves playing bass, synthesiser and electronics for Polish post-rock / folk band ROSK (which originally began as a post-black metal group in 2014), Krzywdy combines elements and instruments associated with folk music with synthesisers and samples to create deep, moody soundscape art. On “Czary”, the results of such folk / ambient / experimental fusion are mysterious ritualistic songs vaguely New Age in sound and attitude. They have an exotic, tribal feel to them, in the constant chanting and the neo-primitive percussion beats, and while the mood seems benevolent, a slight ambivalence can be detected in the straining high-pitched droning and noise effects. Opening track “Ginnungagap” sets the pace and the model to follow: ethereal folk chanting seemingly by spirits from another dimension, repetitive rhythms and beats that you would stomp to in endless circles with the rest of your clan around an altar of burning oils and incense, and shadowy atmospheres wherein dwell secrets of human unconsciousness.

Overall the music is pleasant if repetitive and monotonous, and chanting and singing tend to be even in tone and mood, rarely rising to excitement or other strong emotion. The major exceptions are middle track “Wichry Skalne”, based around a constant acoustic guitar riff, an angry lead vocal, background whispering and an ambience that cloaks voices and instruments alike with a dreamy, precious jewel sheen; and closer “Ragnarok”, a crunchy work of guttural tortured singing. Even on these tracks the music seems to loop over and over until it exhausts itself and quivering percussion drones and guitar take over. I guess all the repetition and the shadowy atmospheres are intended to be hypnotic, intense and immersive, taking listeners on secret shamanic journeys to other worlds that will change their awareness, but the general style seems a bit too smooth for this kind of dark ritualistic folk ambient / electroacoustic music. The music could have done with a bit less smoothness and niceness, and a bit more raw, sharp quality with even the faintest smell of blood and sweat. Being a psychopompus leading souls from this earthly plane to the shores of Sheol is hardly meant to be a pleasant job the way leading a coach-load of tourists through the usual sight-seeing scams from one airport to the next might be.