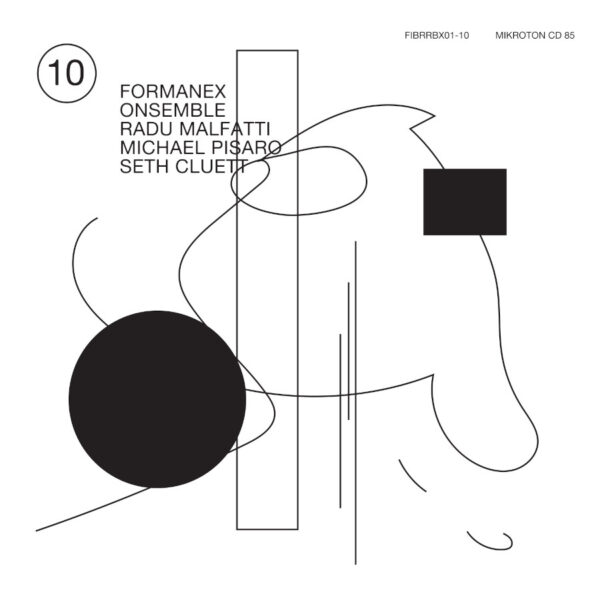 Disc ten of the Formanex box set (MIKROTON CD 85) brings us up to the very contemporary present by showcasing compositions by Michael Pisaro, Seth Cluett, and Radu Malfatti. American composer Pisaro is one of those associated with the Wandelweiser Composers Ensemble, and over time the music emanating from this area has largely been characterised by its extreme quietness and slowness, going beyond minimal. I’ve always struggled to find a way into it, although I did recently find Pisaro’s Achilles, Socrates, Diotima (as played by the Insub Orchestra) more accessible than I thought it would be. On today’s disc, we have a long 30:30 mins piece called ‘Fragile Being, Hopeful Becoming’ from 2016, where what I notice isn’t so much the quietness of the piece, as its inscrutability. It’s played here by the team-up of Formanex and ONsemble, plus the improviser-composer Radu Malfatti, about whom more shortly. I’ll assume the piece is scored, perhaps by the simplest of methods (prose instructions, graphic scores) in keeping with the rest of the box, but it’s extremely difficult to grasp the intention behind this stern and taciturn work, and try as I may I can’t make out the whole shape of the piece, as if it’s too large or diffuse to apprehend. From the general calm hissing of the background noise (amplifiers, perhaps, or just room ambience), occasional odd sounds may emerge, evidently performed with studied care and a kind of brittle focus, as if a single wrong move by the players could cause the whole room to explode. I’m unable to explain what any of this means, but audibly it’s about the most severe piece we’ve yet heard on the whole box, and compared with this ultra-dry Pisaro the Rowe composition about modern art is positively dense with context and meaning, and the AMM performances are as juicy as a guava.

Seth Cluett wrote a piece called ‘For Formanex’, evidently tailoring his skills to their way of playing. I am not at all familiar with the work of this American composer, though I see he has a chair at Columbia and has contributed scholarly texts to peer-reviewed journals and books in the more refined zones of music study. Plus he’s done art installations, video and performance art, and has researched the history of the loudspeaker, perhaps in the context of avant-garde music and its acousmatic possibilities. Cluett is not part of Wandelweiser and this 19:15 piece from 2012 is very maximal. No just in terms of incident and content, but in terms of volume too, often getting quite assertive with its heavy abstract shapes which push up against your face like 12-foot high blocks of rubber. Would love to know more about the compositional methods of a fellow who can discourse on a subject like “the politics of architectural acoustics”, but what he’s done is evidently just right for our French team of players. Confident and solid blocks of subtle, well-sculpted drone and texture are pitched together just right, assembled with the degree of precision tooling one would associate with building a jet plane. Seth Cluett evidently has a strong grasp of how to manage his forces and deliver a strong result, without the need to over-state the case with too much complexity or hyperkinetic activity. Throughout, I’m getting a consistent feeling of “just the right amount” of everything.

The last piece here – and indeed the final track of the box set – is a 2016 performance of ‘Shoguu’ composed by Radu Malfatti. This Austrian trombone player used to blow juicy free jazz and improv in the 1970s, until at some later date he embarked down a more minimal route which I’ve tended to characterise as rather “severe”. He too has joined forces with Wandelweiser, he too is a composer, and he also likes quietness and silence. This ‘Shoguu’ of his isn’t quite as emptied-out or ultra-minimal as I’d been expecting, and the spare tones that we can hear do ring together in pleasing, simple combinations, expressing a vague forlorn feeling along with much uncertainty and abstraction. The style of playing feels a notch or two more relaxed than the strained movements on the Pisaro piece, and instead of a fear of setting off tripped-wire high explosives, we’ve got a situation where it’s been mutually agreed that silence is probably the ideal condition, and any sound that has to be made is regarded as a rather unnecessary stain, disturbing the peace. It also feels slightly less inscrutable. Where Pisaro gives the impression of a gnostic in possession of a deep mystery, whose solution must be earned by the audience through patient absorption, Radu Malfatti allows us to gain understanding in small doses, drip-feeding us information in compressed packages. As we inch towards the goal of enlightenment, we begin to realise that the world is a complex place and everything is very deep.

All three pieces above doubtless come from the period when Formanex “plays and records intensively” with these composers, and Keith Rowe and Christian Wolff. Evidently a very productive and successful time for all. So ends the box set, which I recommend highly. Released in October 2019.

Previous installments of this review: