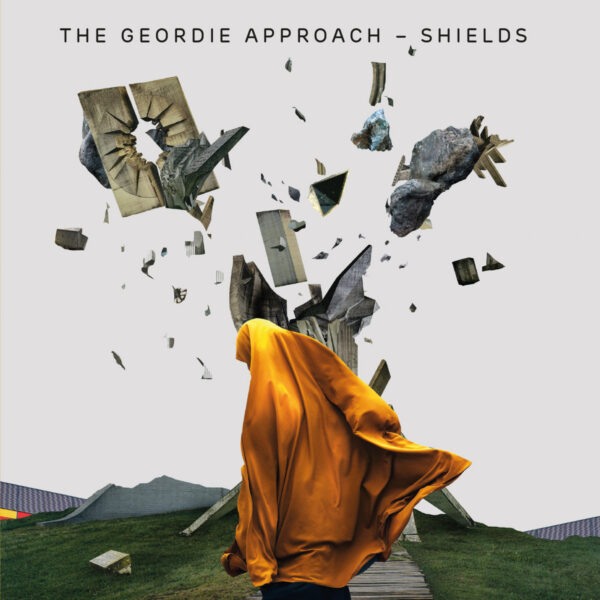 From Martin Archer’s Discus Music label, we have the trio The Geordie Approach and their album Shields. Stale Birkeland and Peter Frost Fadnes are Norwegian, while Chris Sharkey is from Newcastle; what they play is very long and drawn-out improvisations, using saxophone, drums, guitar and electronics.

It seems they’ve appeared before on the Bruce’s Fingers label, with a couple of albums starting in 2007, but their work was edited down on those releases. On Shields (DISCUS MUSIC DISCUS 84CD), we get the full uncut widescreen version, which means not only was the whole thing recorded live, it has not been edited in any way for presentation on this CD. “We had always felt that we fell short of capturing the excitement of our live gigs onto tape,” is one remark in the press release, presumably authored by a band member; so this live set, recorded at Chapel FM in Leeds, should make good the deficit. One side-effect of this decision to allow the mics to swallow all like the mouth of a whale is that we have incredibly long tracks – the second one, ‘South’, clocks in at a whobbering 37:22, enough for a single LP on its own terms. The plan is to let The Geordie Approach really shine – their improvisations use a compositional manner, and they like to follow a semi-structured route whereby each lengthy trek ends up taking an “episodic” form.

This is borne out when you listen; although everything is of apiece and there are no breaks, ‘South’ (for instance) goes through at least three major shifts in dynamic, mood, and tempo. “Mood” is one of the things they do best, come to think of it; the strongest parts of Shields are those moments where they forsake melody or form and simply create their own extremely melancholic wailing sound, with a bleak atmospheric tinge that makes for quite harrowing listening. I seem to be characterising these Northern men in a rather clichéd fashion, highlighting their bent for representing an inner or external coldness, but the darkness in the music is certainly there for all ears with a wintry inclination. Sax and electronics – and guitar of course – are all denatured and processed, adding this strangely alien feel to the tunes, and reminds me of when Archer himself used to do this kind of thing with Herve Perez (e.g. on The Inclusion Principle from 2006, though they both went overboard with computers, field recordings and digital devices, which The Geordie Approach wisely avoid), or in the 1990s when he went very electronic with Chris Bywater for a few albums.

Not jazz, by the way, even though a saxophone is present and the band compare the informality of their set-up to Kind Of Blue (a classic instance of hubris on their part, if you ask me); the music of The Geordie Approach comes closer to the alienating tones of Nurse With Wound, droning away in forlorn fashion, until they start picking up tempo and adding mindless beats and pulses, when it starts to morph into anonymous minimal techno spliced with a very icy take on Tangerine Dream. From 17th January 2020.