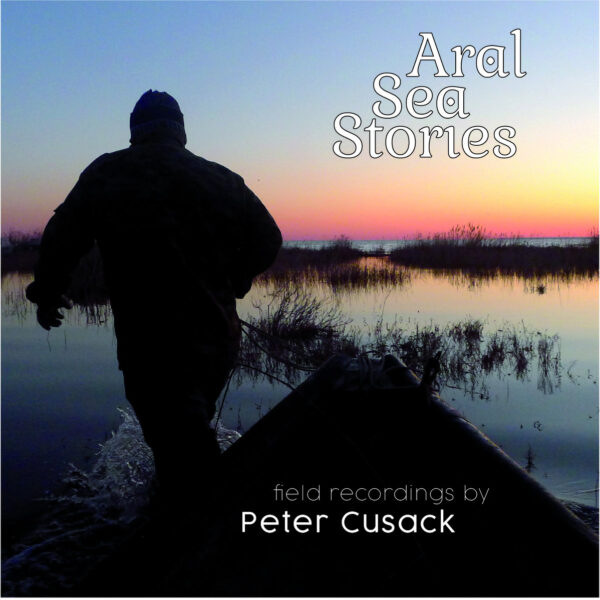 Subtle but effective record of field recordings from English musician and improviser Peter Cusack…Aral Sea Stories And The River Naryn (CORVO RECORDS core17) features five audio captures, and works well as a listening experience even when divorced from its context and meaning – about which more shortly. Five semi-connected parts of a story, as it were, involving a thunderstorm, rain, wind, a folk song, and sounds of water doing odd things; the sparse narrative occasionally punctuated by recognisable human speech.

However, reading the extensive literature around this release reveals it’s part of a much larger project, with a geo-political agenda. Cusack is calling attention to a very specific environmental crisis in Kazakhstan, a country in central Asia that used to be part of the Soviet Republic. There’s been a massive water problem there since the 1960s apparently, due to large-scale irrigation works by the Russians, causing the Aral Sea – once one of the largest inland lakes in the world – to nearly vanish. (Can you imagine what forces it would take to make an entire lake disappear?) Cusack’s sound recordings were made in Tastubek, the Aral Sea, the River Naryn and other key points, and the accompanying text and photographs all tell aspects of the story, revealing particular instances of water usage and abuse. He did it over a five year period starting in 2013, so I have to assume this is a fairly comprehensive audio survey.

Reading about this on my own account, I find that evidently it’s been an environmental catastrophe on a grand scale, bad for nature and bad for the planet, causing health hazards, and has also ruined the local fishing industry and led to mass unemployment. Yet this Cusack record doesn’t hector or harangue the listener with political diatribes; each recording unfolds quietly and calmly, standing as factual reportage, and leaving ample room for debate and consideration. It seems this particular situation might be slowly recovering, as “water levels are rising again and the environment is showing signs of revival”, but clearly it’s not something the human race can be especially proud of. Credit to Cusack for patiently producing such a detailed artistic statement on this complicated situation, and making a good record to boot. From 18 September 2019.