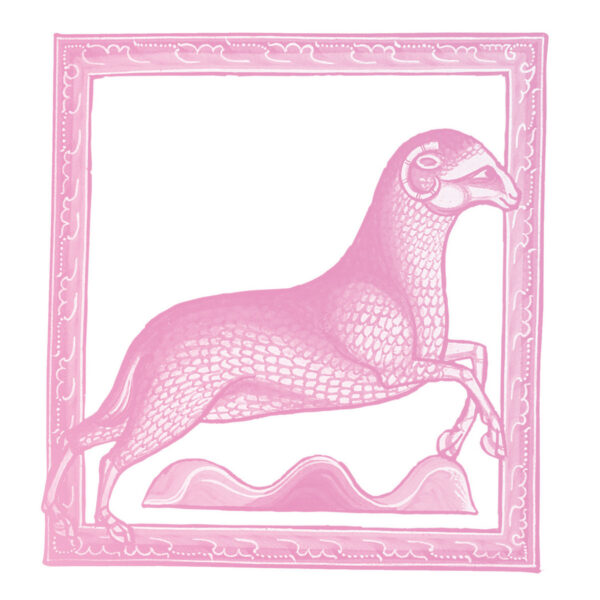 Here we have Insub Meta Orchestra with the other record that was released at same time as their realisation of the Marcus Granberg composition, the one with the orange owl cover. This time it’s the turn of Michael Pisaro with a single long piece with the elaborate title Achilles, Socrates, Diotima (The Poem of Names, No. 2) (INSUB.RECORDS insub.rec.cd04). Like the Granberg, the release is decorated with what looks like a detail from a medieval illuminated manuscript, this time showing a ram on a hillside; this choice of imagery is in contrast to the theme suggested by the title, which harks back to classical antiquity with its references to Greek mythology and philosophy.

I’ve been slow to recognise the qualities of Pisaro, which is likely to my detriment, and for a long time I’ve held certain reservations about anything associated with Wandelweiser. This might be the piece that turns me around, however. Not saying I “understand” the music on this occasion, but I like what I hear, and it might be that the work of the Insub Meta Orchestra has helped me overcome my personal hurdles. I’ve heard a few Insub items by this point and may be getting closer to understanding the musical language they speak, the currency they deal in…so far, what characterises the work of thus Swiss ensemble is their restrained playing, their slow and graceful movements, the understated tones that emerge from a variety of instruments (strings, percussion, woodwinds, guitar, keyboards). Particularly impressive was the economy and skill with which they handled the work on Choices / Melodies, given scored instructions which to this day seem impossibly difficult to me.

With today’s Achilles, Socrates, Diotima, we’ve been given no background information on what the work means or how it was realised, but evidently there’s a structure in place. The structure is subtle, but the sense of the piece emerges if you listen from top to bottom; starting out very quiet, with small unobtrusive sounds popping out apparently at random, much disconnectedness; then gradually we find the music gathering some kind of momentum. By the final passages of the work, things have somehow coalesced into a very pleasing harmonic pattern, producing slow mixed chords with a stately grandeur. I have to attribute this structure, this progression of ideas, to Pisaro, but it’s possible there’s also elements of interpretation going on within the framework. After all, the Insub Meta team have a background in improvisation (though they are showing increasing signs of leaning towards playing more conducted and composed works), and there’s also Pisaro’s Wandelweiser thing. It’s likely I’ve misunderstood Wandelweiser, or things are changing somewhere, because I’ve always assumed it was about ultra-minimal playing and producing works where the given information was so hard to discern that it presented quite an obstacle to the listener. Conversely, Achilles is both accessible and even quite enjoyable. It’s also quite mystifying. But it’s mysterious in a very good way, inscrutable, hiding its shape and meaning behind layers of music, music which is somehow both opaque and transparent.

I have tried, in my superficial manner, to look into connections between the names of Achilles, Socrates, and Diotima, but my classical scholarship is null. Diotima apparently taught Socrates what he knew about the “concept” of love, but the only source we have for this is a single piece of writing by Plato, and modern scholars now dispute whether she even existed historically, and suggest Plato invented her as a mouthpiece for his own ideas. It may be this aspect that appeals to Pisaro, one layer of truth hiding behind another, as it were; the layering is one vibe that I’m getting from today’s spin of the record, ideas filtered through ideas, with interpretation constantly playing a part. Very good. From 19th November 2019.