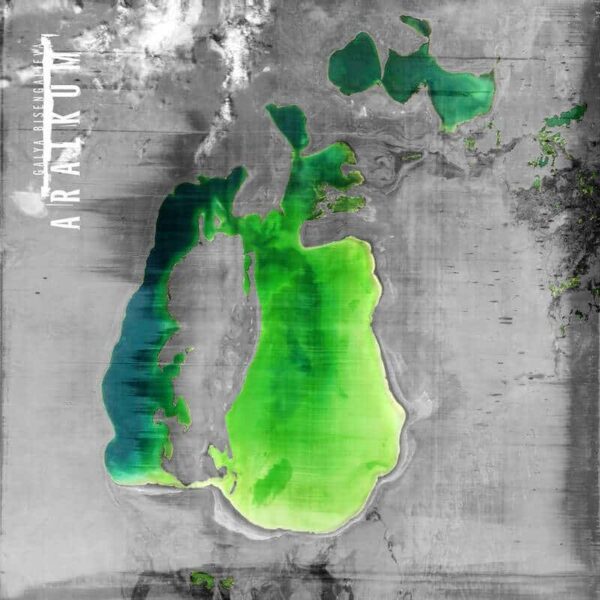 A violinist and leader of the London Contemporary Orchestra, Kazakhstan-born British violinist Galya Bisengalieva has chosen a very challenging theme for her debut solo album “Aralkum”: the shrinking of the Aral Sea in Central Asia (specifically Kazakhstan and Uzbekistan) that began in the 1960s as a consequence of the diversion of the rivers that fed it by Soviet governments into irrigation projects to prop up Central Asian economies based almost entirely around growing cotton for export to other parts of the Soviet Union and beyond, and the various environmental, climatic and local health and economic issues that have arisen from the lake’s gradual disappearance. The fishing industry that depended on the Aral Sea almost disappeared, bringing unemployment, poverty and disruption to the communities sustained by that industry; the climate in the region changed drastically (the lake had had tempering effects on temperatures in an area so far from oceans in all directions, and its shrinkage led to hotter summers and colder winters, with the effects on air movements and wind currents); and agricultural and industrial chemicals and other pollutants that entered the lake or were dumped into it formed toxic dust that was then spread by dust storms into inhabited areas and onto farmland, creating serious health issues for people, ravaging crops and creating even more water shortages.

The album is split into three parts (Pre-Disaster, Calamity, Future) and for most of its running time is a beautiful if melancholy work of ambient immersion. Keen TSP readers will spot the problem straight away: a recording with the concept it has shouldn’t be just melancholy and mournful all the way through. There has to be some anger as well as sorrow that such a situation was allowed to develop and continue in the way it did and still does in some parts of the area surrounding the lake. Equally, with recent efforts by the Kazakhstan government to preserve and restore its part of the Aral Sea, with the result that the North Aral Sea has been expanding and fish stocks have revived, there should be some joy, hope and optimism that some if not all of the damage can be reversed or at least mitigated. (On the other hand, the South Aral Sea, in Uzbekistan, continues to deteriorate with the government there apparently not doing much to save and restore its part of the sea.) The subject matter itself provides plenty of material which could have inspired a dynamic album of constantly shifting soundscapes with many emotional highs and lows.

As it is, the album goes from a lush and wondrous soundscape world on the title track to a darker and gloomier second track “Moynaq” featuring guest musician Pasha Mansurov on contrabass flute. Subsequent tracks keep going along a grey sombre path of drone wash, thin keening solo violin despair and low end rumble. “Barsa-Kelmes” features an interesting grunting industrial drone loop rhythm and “Zhalanash” has some good violin-plucking looping work leading into looming drone sounds and faint birdsong samples suggestive of hope and revival. Apart from these two pieces, the music does not seem particularly varied in its mood or dynamics. Tracks are all short – some run under four minutes – which in my view is not enough for ambient soundscapes of the nature “Aralkum” has to develop fully. The production may be a problem too: it’s a violinist’s work so shouldn’t the violin-playing be a prominent if not the prominent part of the music?

I don’t doubt Bisengalieva’s sincerity or aims in making this album but the music doesn’t really seem to grab the whole scale of the catastrophe that plagued the Aral Sea for so long and to get stuck into it – or “engage with it” as the formal expression goes – to give listeners a good enough idea of the human and environmental tragedy involved. Listeners may well feel the recording lacks enthusiasm and energy and might ask themselves why they should spend about 35 minutes on a work that just tiptoes around its subject.

Editor’s note: Peter Cusack has also made a record about the Aral Sea disaster, which we recently reviewed.