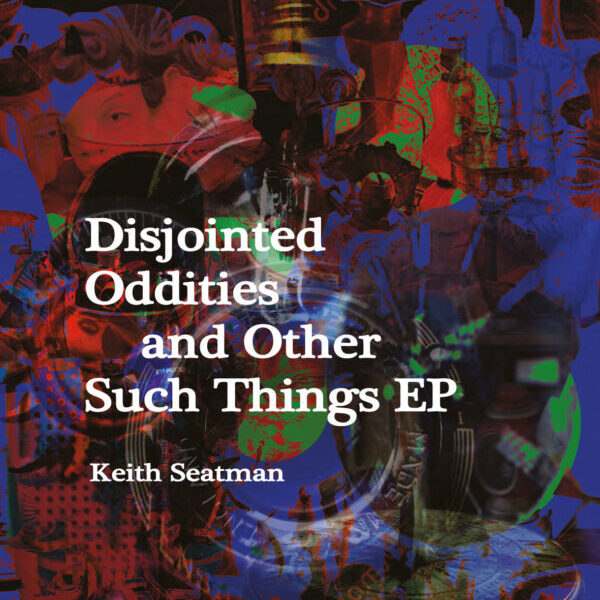 Not long ago we noted the fine Keith Seatman LP Time To Dream But Never Seen with its fantasies of the English seaside. Just discovered this earlier 2018 item tucked behind my leather sofa, Disjointed Oddities and Other Such Things EP (K.S. AUDIO ksa 007), apparently the first time Seatman has made a short five-tracker after releasing a number of full-length albums. The format seems to suit his music, oddly, and he covers a fair bit of the English countryside in just five snappy tunes.

At the middle of the record is the hefty ‘Behind The Curtain, Red Room’ which passes muster as low-key disco with its insistent riff, hiding a slightly worrying tone behind its uptempo mood, as if glimpsing a wizened ghost in the mirror in the guest room of your holiday home. There’s also the pointless anecdote of ‘Grey Lake’, with creaky sounds and vaguely comic shapes depicting the off-kiltre gait of the story’s grandfather. This one resembles a Mr Benn story, taken through a psychedelic looking glass. Speaking of psychedelic, ‘Something for Nothing’ is the most sun-drenched track so far with its multiple effects, and its vocal distortions have a weird charm that’s about to turn unpleasant if seen from the wrong angle.

For the rest, we have Seatman’s flirtations with folk motifs – ‘A Child, the Hare and the Old Wooden Chair’ has a title like a pastoral morality tale, and cut-up snippets from Jackanory or other similar twee middle-class TV show. The main event is the remix of ‘Broken Folk’, an ongoing project which we did note in passing on the last review, and which features talents of Keith Seatman’s sparring partner in gumboots and deerstalker hat, Douglas E Powell (lyrics and vocal). Actually this one isn’t quite the rustic head-scratcher I was expecting and is more of a disco thing (perhaps due to presence of Revbjelde), but the vocal has a distant, yearning quality which I like, and the simple melody stays with you. Besides the “Disjointed Oddities” of the title, I see Seatman likes using a lot of ways to indicate his lovable eccentricity in the press notes, with words such as “odd”, “strange” and “quirky”, but his music lives up to the promise. From 2nd May 2018.