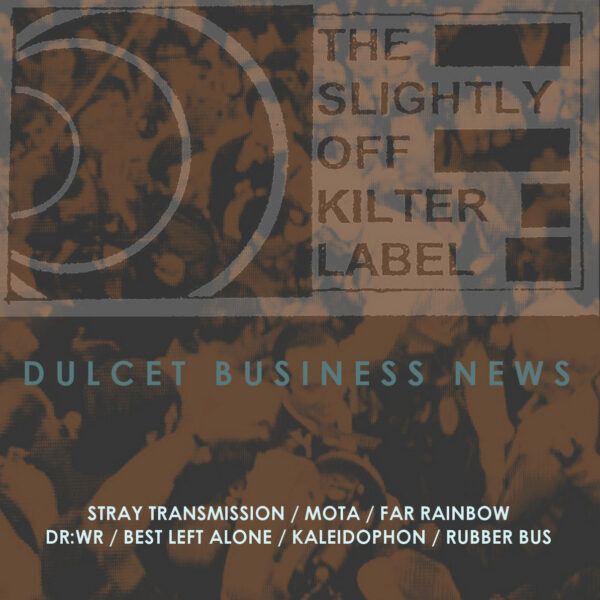 English label The Slightly Off Kilter Label put together a compilation / sampler release in 2019 called Dulcet Business News (sok080), an ingenious title suggesting that making music is a “dulcet business”, and here are the latest sounds from the underground…four of the eight cuts are glommed from previous TSOKL releases, but four are unreleased, making this both a useful introduction to aspects of the label programme and a collector’s item for those who need to own everything.

Situated more or less in the area of techno and beats and related genres are Rubberbus, Kaleidophon, Best Left Alone, and Stray Transmission; Rubberbus from Brighton offer us two examples of their craft, ‘Tera’ and ‘Spaceman’, both agreeable sojourns in a home-made DIY studio environment, specialising in minimal sounds and simple tunes; both tracks draw influences from dub and reggae, though I kinda prefer the ‘Tera’ item (mixed by Saul Yarg) for its mysterious fug-like aura, drawing us into a slightly unfamiliar corner. Kaleidophon, also from Brighton, have a connection with the indie rock band Fujiya & Miyagi, one of many such combos who draw from the krautrock well – a fact which may have some bearing on the “cosmic” nature of their track, ‘Message From Another Star’. Liking the bold use of retro-styled electronic bloops here, along with the weird dynamics of the rhythm track; a gorgeous and puzzling miniature in 3:25 mins.

Best Left Alone comes to us via Hybrid Kid (nothing to do with the Morgan Fisher thing, presumably) and Imitation Electric Piano; their unreleased ‘BTW’ track again makes quite daring use of signature sounds and moves from across the board, including dub and drum and bass, although the disparate elements don’t quite coalesce into a meaningful whole as yet for this listener. Stray Transmission of London is the bass player in Inner City Unit and he appeared on a record of Kuroneko remixes called Waxworksss Remixessss on this label. The idea behind this “slacker sound art techno” (full marks for inventing a new micro-genre there) is to mix electronica with urban field recordings, such as traffic sound, very fitting for a tune called ‘Crossing’. Liking the vibe of urgency and paranoia from this one, but I also kept waiting for something interesting to happen in this 8:33 sprawl of beats, monotone electronic sounds, and documentary overlays, where instead it seems to be stuck in neutral.

Situated in the latterday psych and prog modes, we have DR:WR, MOTA, and Far Rainbow. DR:WR’s Sci-Fi Morality Play is one release we have already enjoyed, and welcome the opportunity to relisten to ‘Infred Deathray House Party’ in any context. May not be especially “psychedelic” in the conventional sense, but it does come across as something of a “bad acid” special with its claustrophobic, feverish sounds swirling in a sickly germ-infected lightshow. This is Karl M V Waugh from Brighton and we hope to hear more from him one day. MOTA’s ‘Death By Yoga’ is a rather ponderous drone piece which kinda outstays its welcome at 11:19, but there are plenty of textures and elements in its half-collaged, half-performed tapestry. MOTA is an acronym for Music Of The Andys, which may explain their flirtation with Peruvian throat singing for one part of this opus. There’s some nice Steve Hillage styled guitar licks later on, if you can wait for them, along with some rather heavy-handed bass playing. Another cut on this comp where I was hoping for more “eventfulness” than was actually delivered.

Lastly we have the lovely Far Rainbow duo, who work miracles with just electronic sound and a drumkit and are reckoned to be fabulous as a live act. To my mind their material works best when given ample space to stretch out, but unfortunately they only get 3:30 on the roster today. It’s an excerpt however from a longer performances of ‘The Power Of Degenerated Matter’, also released by TSOKL. “A new comp…with a bit of a different approach stylistically”, says label boss Paul Khimasia Morgan; perhaps he means he’s shooting for something with a tad more altruistic appeal than some of the bracing free improv records he has been known to release. From 24 May 2019.