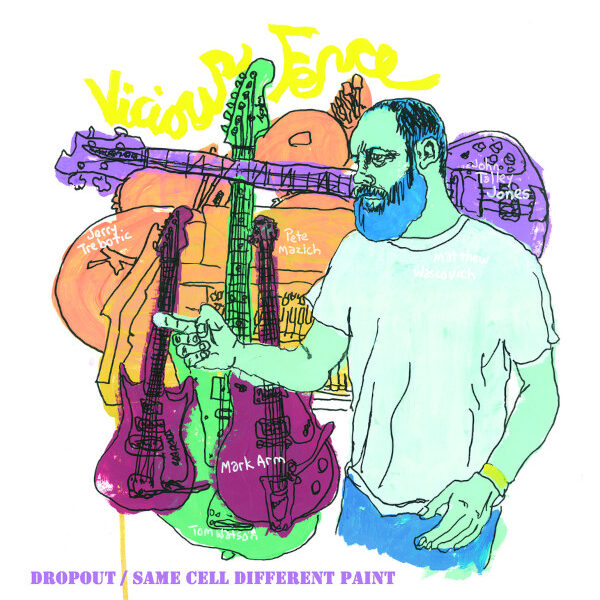 Last noted vocalist / frontman Matthew Wascovich in late 2019 with a number of records from his many projects, including Scarcity Of Tanks and Hidden Rifles. Scarcity Of Tanks is a band who keeps the “flame” burning not only for fellow Clevelanders Pere Ubu, but also rock greats such as Stooges and Minutemen. This trend continues with Vicious Fence, MW’s new combo who have put out a couple of spiffy singles, both of which arrived here in Feb 2020. I see they were recorded at Long Beach and mixed in Seattle, which puts us some distance from Cleveland, but the intensity of the music hasn’t dimmed by a candle lumen, and they have the most direct, uncluttered sound – all four songs hit home with clarity and honesty.

The band is Tom Watson from Red Krayola, Jerry Trebotic and Pete Mazich from Mike Watt and The Secondmen, John Talley-Jones from Urinals, and Mark Arm from famed Seattle grungers Mudhoney. I found ‘Primitives / Humanoid Front’ (TOTAL LIFE SOCIETY TLS012) very accessible, perhaps moreso than the more “artistic” and relentless Scarcity Of Tanks, and the Vicious Fence evidently have a strong gift for melody, keeping the songs simple, and allowing space for all instrumental voices to be heard; Watson’s guitar licks are one highlight, but I also relish Mazich’s organ swirls and stabs. Heck, even vocalist Wascovich doesn’t sound as menacing as he normally does and you feel you could step up to him after the gig to ask him to explain what it means to be “bound with the primitives”. So far the nearest comparison would be the first Television LP, a complement not to be paid lightly.

The other seven-incher (TOTAL LIFE SOCIETY TLS011) likewise scorches your sideburns, especially the A-side ‘Dropout’, delivering a solid wodge of tight poppy-punky playing from five hefty pros, enhanced by a no-nonsense production courtesy of engineer Jonny Bell. On the flip ‘Same Cell Different Paint’ we’re back in the turf Wascovich knows so well, as he laments yet another of society’s inescapable traps, but the band’s crisp playing of this deceptively tricky tune (odd dynamics, chord changes and such) is enough to uplift the spirits. This record is old-school pop-song length on both sides (2:15 and 3:10), another point which scores heavily in its favour, proving you don’t need an eight-minute dirge to make your point. Tim Kerr cover art for this one, while Alan Bishop of Sun City Girls did the photos for Primitives. A brace of muscular beauts…both arrived 22 February 2020.