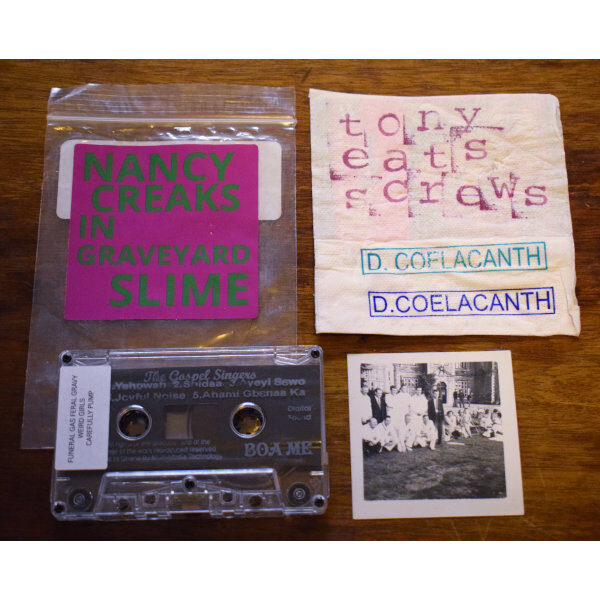 We first heard from Dai Coelacanth with his bizarre cassette A Condemned Debtor Does Not Recognise The Horse released in Europe by Staaltape in 2019. As it turns out, we’ve had an earlier release from Dai sitting in the box since 2018, which we’ve just gotten around to unearthing. This one might be called Tony Eats Screws, and like the Debtor tape it recycles an existing musicassette, and is loosely packaged with his short cryptic messages and absurdist couplets printed on stickers and pictures, plus there’s a badge, a hand-printed cover which applies toy stamped letters to a piece of kitchen towel, and a found document no doubt retrieved from the streets. Short of putting all these bits and pieces in a jiffy bag, there’s no convenient way to store this item; a creative gesture which could be interpreted as a form of anti-art, or just plain untidiness. Dai Coelacanth is a strange sort of wandering poet, dealing in the spoken word spliced with multiple cut-ups; his technique may be quite crude, but it’s very effective, and only a short spell listening to his unique brand of verbal spew mixed with found aural debris and unidentified noise is enough to unhinge any listener. 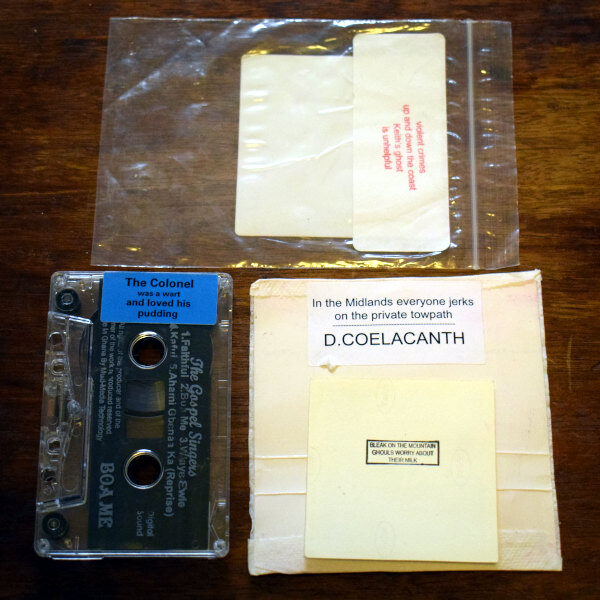 I’m finding Tony a slightly more coherent listen than Debtor, which I seem to recall was bordering on the incoherent; at least this time around, the material is less fragmented and you stand a chance of following the train of thought of DC, if so disposed. He certainly has a turn of phrase that is remarkable; any line plucked from this torrent of free-form association could stand as a tiny rough diamond of poetic invention. But he doesn’t make it easy for us. Not a minute goes by but the flow of the monologue is interrupted by strange noises, mostly very unpleasant in nature; his speaking voice is deliberately mangled, his accent thick, making it hard to decipher key words; and the recording is heavily distorted throughout, with the hum of his device clearly audible at all time, adding yet more obstacles to clear comprehension. Yet the emotional content still comes through. It’s not necessarily a very nice emotion, either. Dai Coelacanth, or more likely the persona he chooses to inhabit, seems to be a bitter, twisted, individual, muttering dark curses against the world and everyone in it, choosing oblique and obscure language with which to sharpen his deadly knives. He’s also very much of the street, using common terms that anyone could recognise, and manages to project a phantasmic version of modern urban life.

Abrasive, coarse, noisy; not a pleasant listen, but it’s becoming clear to me this fellow has his own singular view of the world, and is driven to express himself by any means possible, clasping at whatever rags of verbiage he may. From 8th August 2018.