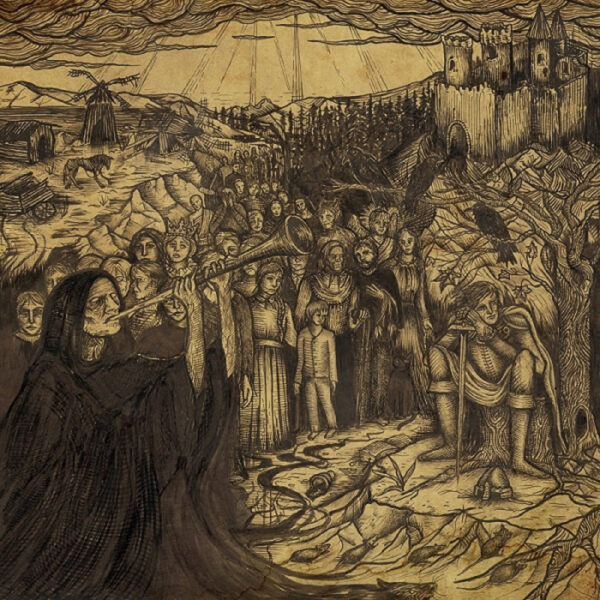 It starts off sounding like a typically lo-fi and raw black metal album, huge in its aggression and at first short on finesse and subtlety – but listeners who stick with “In Purge There is No Remission” might be surprised at how technically complex and subtle the album turns out to be. Ordinance, the band behind “In Purge …”, features two members Lauri Laaksonen and Arttu Ratilainen who each boasts a considerable rap sheet playing in various black and death metal bands in the Finnish underground scene – which probably explains why Ordinance itself, in spite of having existed since 2007 at least when the band first released a single, has so far only produced two albums about six years apart. LL and AR obviously believe in taking their time with this joint project and “In Purge …” sounds very much like a product of loving care and thought, with each and every song balanced between raw aggression and energy on the one hand, and on the other technical skill, attention to detail and good production. The music flows very well, there is much enthusiasm present. Yet the musicians maintain good control even when the music is at its fastest or most intense. Each succeeding song brings in a new musical or ambient element or set of elements – though Ordinance don’t exactly reinvent the BM wheel and most of these elements are familiar to BM fans – so that the entire album becomes a mini-history of how BM itself built up from its lo-fi origins to a more complex genre (without going into all its numerous offshoots and fusion genres) while retaining its core characteristics and staying true to its ideals.

Opening track “Obstructed Paths” emerges into existence in a low-key swathe of feedback and creepy background doom drone and then blasts out of its dark swirl in a tight burst of rapid-fire blast-beat percussion and trashy stutter tremolo-guitar chord scouring. The vocals are rocks-in-the-throat gargle chants and declamations. After the fury of the opening track, taking listeners into their dark Satanic universe, Ordinance open that cosmos further with “Diabolopathia’ which features dissonant guitar chords and jangly riffs not too far removed from French BM duo Deathspell Omega’s music – and almost as much complexity as DSO’s world, though in a more digestible way. There’s even some cold atmosphere attached to the vocals and a ghostly choir, almost deranged, can be heard in the background in the song’s later half.

As the album continues with songs like “Gathering Wraiths” and “Credo Sceleratum”, Ordinance bring in more complex music including demented lead guitar solo scrabbling breaks, background siren singing that turns into horror shrieking and something of a technical death metal style that bulks up the music and gives it a crunchy edge. Acoustic mandolin-style melodies, startling in their clear and taut fragility, make an appearance here and in later songs. Catchy melodies and riffs become prominent too, as do more runaway, almost out-of-control scrabble fretwork and martial beats and cries, all in one track (“The Kingdom of Nothing”) which might almost be a mockery of martial folk BM. “Gesticulation of Death” might be as close as Ordinance come to playing depressive music while keeping to their core melodic old-school style. Closing track “Purging Kremanation” reverts to the opening track’s raw fury and passion but then reintroduces other aspects from elsewhere in the album: the acoustic folk tunes, the scrabbly lead guitar solo fretwork shavings, the background siren singing – all leading to an epic bombastic conclusion in which everything exceeds the limits of endurance and sanity, going on and on almost relentlessly. Funnily though, it’s at this point in the album that the band fails in creating all-out destruction and chaos – the music is actually too clear and a bit too tasteful and controlled – and the Ordinance guys resort to repetition to get the message over.

The Ordinance men have fun charging through various sub-genres and fusions of their beloved raw melodic BM brand, and perhaps sending up a few of their favourite bands and genres along the way. Each track builds up to the final song “Purging Kremanation” and my impression is that this song is supposed to be the song that ends all songs on the album, having features of all of them, but the climactic cataclysm ends up a bit of a repetitive fizzler. It’s a bit too clean and smooth, a bit too technically precise, and not unhinged and loony enough for a bombshell all-purging, no-mercy racket of melodic BM noise. Perhaps Ordinance erred in wanting too much control over the demons in the music instead of letting them off the leash for a few short moments in that last track. I daresay the Ordinance men might have a few loose ends from this album to pick up on the next major work, which defeats the purpose of a recording called “In Purge There is No Remission”. While their fans might have a wait a long, lo-o-ong time for the next album to find out if the punishment was complete, at least they can ride through a sonic tour of BM with Ordinance as their guides.