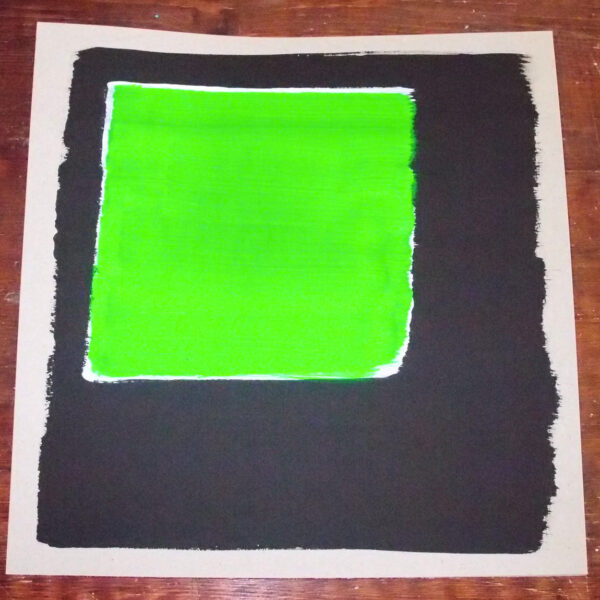 Another long overdue notice for Jason Kahn, the American musician / composer / performer who’s been living in Zurich for many years, with another one of his excellent self-released double-LP works housed in a hand-painted cover. Monads (EDITIONS 005) is not only a great listen, but also one of most tightly-integrated and well executed records we’ve seen for some time; so nicely conceived and planned that one can’t imagine it existing in any other form than a double LP. The piece divides into four discrete, yet related, wholes; the timing of each side falls within the ideal range of around 18-19 minutes; and there’s an understanding by Kahn about the nature of vinyl pressings, about which more shortly (if I remember it).

The plan with Monads is to showcase the four pillars of his musical endeavour, as represented by electronic music, singing, percussion, and field recordings. Each pillar occupies one side. Already the plan starts from what I would call a sound architectural basis; Kahn goes further, bringing in a philosophical reference, informing us that “monads” is understood to mean “the elementary particles which combine to create a substance”. I believe this came to us from Ancient Greek philosophy, specifically the Pythagorean school; I mention it because anyone who plans out and structures an LP based on ancient scholarly ideas is welcome at my abode any day of the week. Kahn proceeds to detail the execution of each side over eight columns of text, discursing freely on both the technical aspects of the set-up, production and recording, and any ideas from the history of music that seem relevant to the task. In this way he takes in a sizeable cultural shopping list that includes John Cage, Max Neuhaus, The Beach Boys, Folkways Records, free improvisation, Ghanian percussion, and the books of Henri Lefebvre. Sheesh, can you imagine having breakfast with Jason Kahn?

In all seriousness, the text here is not a form of cultural one-upmanship, rather it indicates the precision of the man’s thinking and the clarity with which he formulates and develops his musical ideas. One wishes more musicians had the intellectual rigour, and the musical ability, to follow this route (rather than simply namechecking “krautrock” and other supposedly hip genres on their press release). It’s also evident that the Monads record represents a lot of work and a lot of musical craft, and as ever Kahn doesn’t short-change his listeners. As to the music, the whole record is a non-stop delight; each side works as a self-contained composition in its own right, with many changes in timbre and dynamics that keep you listening the whole time. Shrill noise, soothing drones, percussive textures, astonishing layered voices – just some of the excitement that awaits you. The record kind of “balances” nicely, perhaps without being planned that way, but the Electronics and Percussion sides (A and C) are abstract and modernist, while the Voice and Environment sides (B and D) tend to entertain narrative and story ideas, especially the fascinating jumble of documentary sounds on Side D. There is also much warmth and presence, not only in the sound quality but in the performances, and the background to the work; Kahn is a man who loves his family, and one who likes people in general, and this shows in the whole of Monads.

So, just to conclude by following up on the “vinyl pressings” thing – it seems Kahn is taking a leaf out of the Folkways book and leaving his recordings unenhanced, i.e. not subjected to studio malarkey. This is apparently one of the hallmarks of many pressings on this famed Moe Asch label – what Kahn calls their “flat frequency range”. Some listeners / collectors hate it. Not Kahn. He’s actively trying to emulate it here, and if you get him started he’ll get into a whole discussion about compression and loudness wars, and speculating that he should make a record in mono. Which wouldn’t be a bad idea at all. A fine release, still on sale at time of writing (May 2020); arrived 20th March 2017.