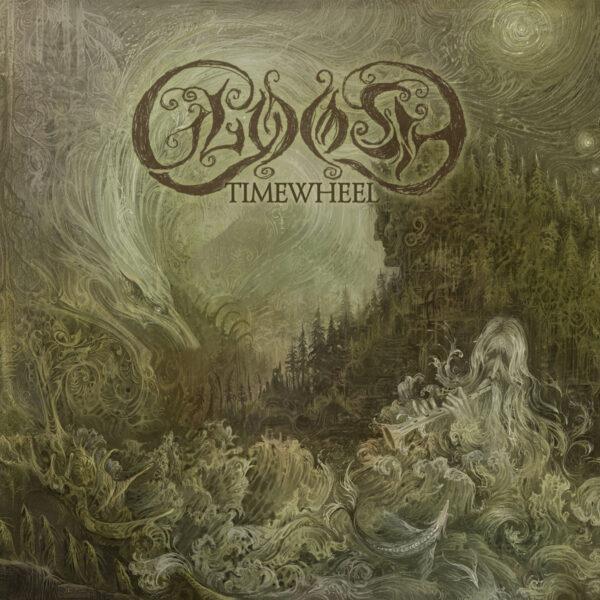 Here’s one of those times where the album front-cover artwork drew my attention before the music did: the debut album for Russian one-man atmospheric BM project Gloosh, “Timewheel”, features beautifully shaded figures representing the spirits of nature, and the work draws viewers’ attention right into its centre as it should to make them aware of these forces of the natural environment and time that swirl around us and which we rarely acknowledge, but which ultimately rule our lives and fates. Our ancestors in earlier times thousands of years ago knew these natural forces and worshipped them as gods or at least regarded them as spirits and treated them with respect if not admiration or awe, and Gloosh reminds us of these old attitudes, the respect people had for Nature, and the associated traditions, rituals and customs, in “Timewheel”.

The music starts off as a rushing guitar-dominated flow dependent on speed, repetition of riffs, vocals that roar and slaver, and blast-beat percussion. The riffing aims to capture the primeval, surging forces of the natural world: always active, always restless, constantly dynamic and shape-shifting and unstable. This sense of the changeability of Nature is captured in the first track “Vjkhr” where speeding tremolo guitar riffs race about like blizzard winds. The drumming is thin and dicky in sound but this accentuates the noisy, grinding tones of the guitars and adds to their unstable, ethereal quality. Later tracks are a bit more settled, the bass can be heard beneath the raging noise, the music more structured and more conventionally melodic black metal, with elements of other genres added to individual tracks, and the riffs and melodies are much clearer. The percussion is a bit better and sounds more like acoustic drumming and less like synth drumming but is still very thin. It’s as if having introduced themselves to us, the denizens of the natural world are adopting forms we can more easily understand them in.

While the opening track and the title track are not very remarkable and must be seen as establishing Gloosh’s style as well as the album’s theme and direction, later tracks have more individuality. “Samsara” turns out to have a fair amount of variety in its pace and style, and features a progressive rock moment just after the halfway mark when the lead guitar lifts off and travels the cosmos in wonder while the rest of the music follows in sparkling mutual awe. The track has a majestic quality in its almost doom-styled riffs without falling into head-pounding bombast. For once at least, having thin percussion is an asset, not a setback! “Clouds” is a solid effort, sounding a bit like blackened death metal in parts, with an unforgettably fragile middle section where a lone melody holds the song together and more swelling music coming later on. Closer “Mokh” pits some interesting drumming rhythms, pitter-patter though they are, against surging guitar music in an ever-changing flow.

Tracks on this album should be heard in full as often their highlights, when the music really starts to expand or go off in very different directions, arrive only halfway through or after the climax. This does require some patience on the listener’s part. As songs frequently change in pace and mood, they tend not to stand out much from one another and it’s only when they’re heard individually that their distinct features start to stand out. Then listeners will discover that each track is a well-made, well-crafted work of love, effort and passion on the part of multi-instrumentalist Georgy Gabrielyan, the man behind the Gloosh project. I’d have liked though an extra little closing piece, maybe just all whooshing guitar noise drone, attached to “Mokh” or as a separate track in its own right, as the spirits make their farewell and return to their universe, unseen by us of course but existing alongside our material world.

The gorgeous artwork is by Taya Rostovtseva.