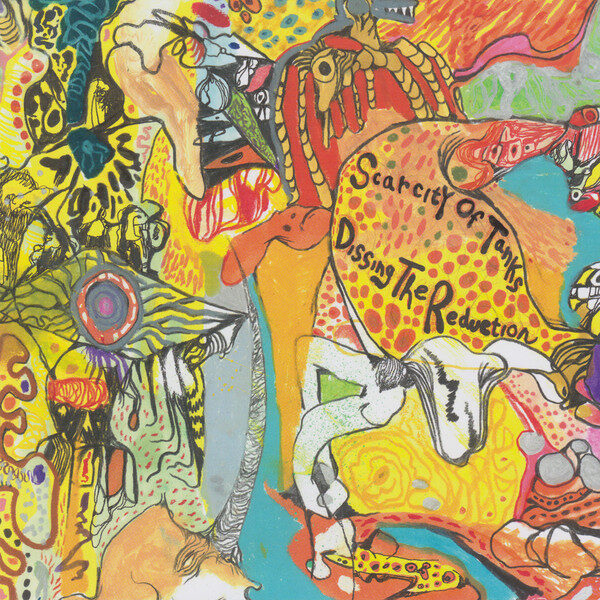 First of all, one thing really needs to be addressed. From where I’m standing, there clearly isn’t a scarcity of tanks, as “Dissing…” comes as the tenth outing from this somewhat amorphous project, since forming in Ohio, back in 2004. And it looks like a skad of further releases can always be assured whenever band founder/vocalist Matthew Wascovich chooses to call in a few favours from the ranks of the U.S. underground glitterati. Those who have responded for this year’s instalment are, as usual, a tantalising amalgam of those aligned to the more linear verse/chorus/middle eight guidelines like Dennis Callaci (Refrigerator), ex Minuteman/bass Stooge Mike Watt and John Talley-Jones of The Urinals, and the more exotic non-conformists like Text of Light’s Ulrich Kreiger, Alan Bishop, ex Sun City Girls and The Swans’ Norman Westberg.

As Ohio is pretty much the ‘Avant Garage’ capital of the U.S. (with statues of The Electric Eels, Old Pa Ubu, The Styrenes and X Blank X positioned in principal cities), it’s only right that this long-running concern gouges that same wide groove in which the two stylistic approaches of art punk and the avant garde screech and grind gears before impact. In amongst the short, sharp shocks of “Legit Prick” with its “Ice Cream for Crow” drum patterns and the moody strains of “I Wish I Could Care”, the ‘Pink Flag’ informed brevity gives way to allusions of a Bladerunnered futureworld in the shape of “Residents of the Force Field” and the Chromesque “Crushing the Androids”. Even though the expected sonic disruption via VCS3s and theremins is sadly absent, a certain kinda headlong rush into dark places is pretty evident. I’m sure any one of the “Roy Series” androids would gain some succour from “Dissing…” during their short, allotted time span. Though, naturally the latter cut would set alarm bells ringing as it does seem to call for all replicants to be deactivated forthwith. A mention must also go to “Doing Time in my Dome” which is either Covid 19/Safety Bubble pre-cog (after all this was recorded in 2019), or a nod to a certain place where “the strange ones” might still possibly reside; (see Bowie’s “Drive-In Saturday”). With Matthew’s obtuse lyrics, as ever putting a question mark over the proceedings…it’s anyone’s guess really.

Those interested in further tank-related activity should be directed to a couple of seven-inchers by Vicious Fence, who seem to be Matthew W’s second bow-string. “Dropout” and “Primitives” (both on the T.L.S. Imprint), come with sleeve artistry c/o S.C.G.’s Alan Bishop and Tim Kerr; one-time member of those legendary Texan punkers The Big Boys.