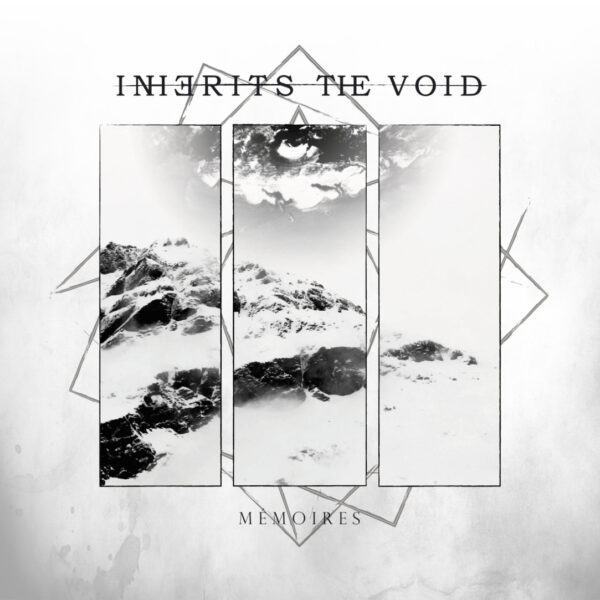 As sure as the sun rises in the east and fish swim in the oceans … another promising black metal act comes out of France in 2020. Based in Clermont-Ferrand in central France, Inherits The Void is a solo BM project with post-BM / hardcore influences, and “Mémoires” is the project’s debut release. All music and lyrics were composed by Antoine Scholtès, or [A] as he seems to prefer, apart from some of the lyrics on “Paysages Polaires / Polar Landscapes” which were extracts from poems written by 19th-century French poet Charles Leconte de Lisle in his work “Poèmes Barbares”.

Track titles seem to trace a linear path that suggests a psychological and spiritual journey from the realisation that what we believe is true or real turns out to be illusions, and the chaos and depression that result from this awareness. Opening track “Illusions” is a raw, painful work of grinding, abrasive tremolo guitar and fast flippy drumming, beneath which vocals on the verge of drowning beneath all the noisy instruments rage and try to reach out to listeners. Gripe all you want about how the vocals are too far back in the mix but to me the vocal wipe-out seems like a deliberate choice – the music in “Illusions” and in the two tracks that follow “Paysages Polaires” and “Noirceurs / Darkness” really give the impression of someone lost in an existential hell, trying to find an anchor, reaching out to those who can help, and failing the whole time. There is not very much difference across all three tracks – all are fast with scourging blizzard guitars and machine-gun percussion going for broke, the music dominated by riffs loops (some of which can be rugged with a crunchy edge), the vocals nearly being swept away out of existence – and listeners really need to pay attention to parts of “Paysages …” and “Noirceurs” to find those few good jagged riffs that leave edges so sharp and raw in the music that your senses bleed with them.

Probably about halfway through the EP, with the latter part of “Noirceurs” and most of the title track, the music slows down enough that a more melodic and emotional aspect of the music emerges and this is where [A] starts to shine with a real sense of how to use melody, riffing and song composition skills to create music with real feeling and drama. The riffs become a bit more distinct and convey a real sense of tragedy. The music becomes more varied as well, with “Ascension” being the one all-acoustic instrumental track with a deep contemplative atmosphere. Outro track “Le Dernier Visage / The Last Face” is a bit meatier and more dense with some field-recording ambience and emphasis on longer instrumental sections with lead guitar melody over the riffs and more complex percussion.

While songs are not very distinct from one another, the lack of individuality is understandable in the context of the recording which tells a story at once universal and personal, with a very ambiguous and open-ended conclusion. There is some very good music coming about halfway through the EP and the work does become more interesting from then on. Limiting himself to the core BM instruments of guitars, bass and synth percussion, [A] shows versatile and consistent musicianship. Individual songs demonstrate his ability to write and play fragile and emotional tunes as well as solid, hard-hitting riffs. The production may not be outstanding but it’s clear enough for listeners to hear the emotion and appreciate the drama and mood in the music.

This EP might not be the most stupendous beginning of a (hopefully) long career for [A] and his ItV project but at least it lays a solid foundation for his ability as a multi-instrumentalist and composer to improve on.