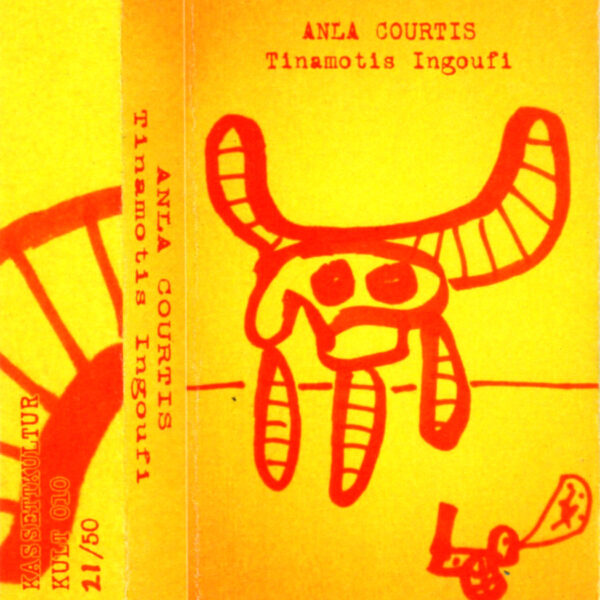 Here be a cassette from Anla Courtis released on the amazing Kassettkultur label in Norway. We might have received this one in 2016 as part of a package from Petter Flaten Eilertsen, when he also sent us the wild tapes by Jono El Grande, Maja Ratkje and Bjørn Hatterud, items which are treasured in my cave of precious jewels. Anla’s item is called Tinamotis Ingoufi (KASSETTKULTUR KULT 010) and arrives in a spray-painted shell and a matching sunburst-finish card with red drawings by Anla.

2011 was a busy year for this Argentinean sound & noise maker, seeing him release collabs and splits with Daniel Menche, Antony Milton, Tabata Mitsuru, Kommissar Hjuler, and Machinefabriek, besides posing for the cover of The Torrid from the time when he made his famed trip to the North Pole. In terms of solo records, not so many – apart from the Live In Sydney CDR he made for a small Belgian label, so it’s good to get this reminder of what he was capable of when left alone in the room with sharp instruments. There’s one live track from Leicester dated 2006, the remainder made at his home town of Buenos Aires presumably in his water-cooled studio, around 2008-2010. The Leicester cut – called ‘Efmamjjasond’ – is a certified steel radial grinder of solid stone proportions, just shy of eleven minutes and stretching out into a thick grey fog of rapidly-hardening plaster of paris. I think this is him making his own unique form of improvised musique concrète right there in the room, using undisclosed devices and objects, applying lots of textural processes and treatments as he unfolds the laundry hamper.

This steamroller alone justifies your ripe prunes, but the judges are keen on awarding bonus points to ‘Pentlandii Silbon’ as well, the weirdie fright-monster that closes the tape. Remorseless use of backwards tapes (and sideways and lengthways tapes, no doubt) is the key to making this spookster the pale grimoire it needs to be, constantly manifesting ectoplasmic horrors inside an imaginary “non space”. With the live track at least you can tell there was a man in front of an audience at some point, but when Anla gets into the heart of the studio beast, he can create an unreal environment to match Pierre Henry on any given Dimanche. There’s also the quite good ‘Monte Ralo’ which might have been made with the famous “melting guitar” he purchased in Indonesia that time, and the forlorn drone of ‘Inambues’, probably played on one of his home-made one-string instruments made from discarded junk.

All of this rough hand-knitted music makes quite the contrast with the far more recent Buchla Gtr, which was the last record we heard from Anla Courtis, released in 2018 but made in 2014 when he was allowed to start fires with the Buchla synth at EMS Stockholm. That sumptuous vinyl release was still imbued with the eccentric Courtis persona for sure, but end result was slightly more polished and produced. For the raw-sounding distorto uncut junk of the old days, check in here. Released in 2011, may have arrived 19 July 2016.